Drugs in the amorphous form are loaded into porous silica particles, which provide a maintained concentration gradient for skin delivery.

Efficient dermal delivery of poorly soluble actives is still a challenge. For compounds that are poorly soluble in both water and oils (e.g., rutin with 125 μg/mL in water and 1.3 μg/mL in oleic acid), there is a very low concentration gradient between the dermal formulation and the skin, which consequently results in a low diffusional flux (see Figure 1). A general basic approach is to increase this concentration gradient by increasing the saturation solubility (Cs) of the actives. Methods include the admixture of water-miscible organic solvents (e.g., alcohols), the use of co-solvents such as polyethylene glycol (PEG), or complexation with cyclodextrins. There are, however, problems with these approaches that can limit their effect. In the case of volatile solvents such as alcohol, the solubility of the active decreases with application time, because of the fast evaporation of the alcohol, leading to precipitation of the active on the skin in the form of large crystals that have low penetration through the skin. With the co-solvents approach, crystallization can also happen when the solvent penetrates into the skin faster than the active itself. Penetration from cyclodextrin complexes is low if the binding constant of the cyclodextrin complex is high. In this case, only little active is released to the skin.


Other approaches to increase the saturation solubility of an active are by nanonization of the active crystal to nanocrystals (which increases the dissolution rate), or to use the amorphous form of the active. The NanoMorph technology (Abbott GmbH and Co. KG, Germany) combines both of these approaches to create amorphous nanoparticles (1). The amorphous state, however, is physically unstable and tends to recrystallize spontaneously during the shelf life of a product. A novel delivery system, known as smartPearls (PharmaSol GmbH, Germany), has been developed to address these challenges. smartPearls are porous particles, with the active loaded inside the pores. Being in the so-called mesopores means that the amorphous active has a nanodimension (2–50 nm), but it is not a nanoparticle. In other words, smartPearls combine the solubility increases (âCs) from both the amorphous state and the nanodimension, further increasing the saturation solubility and providing an efficient dermal delivery system.

smartPearls are micron-sized porous particles, which are typically silica particles (e.g., Syloid silica, W. R. Grace, Columbia, MD, US). There are also various other materials that can be used, such as porous calcium carbonate or polymeric particles. Silica particles are commercially available as regulatorily accepted excipients with different pore sizes. Mesopores with a diameter between 2 nm and 50 nm are preferable, although larger pores can also be used, such as macropores in the range of more than 50 nm up to a few 100 nm. The pores are filled with the active drug in the amorphous state. Silica particle sizes range from 2 µm to a few hundred µm, and are, therefore, considered as microparticles. To avoid the sedimentation effects in dermal formulations, sizes of a few µm are preferred.

Loading of the pearls is performed by the impregnation method. An alternative solvent-free method is by co-extrusion of silica and the melted active. In the impregnation method, the active is dissolved in a regulatorily accepted solvent. The silica particles are then soaked with this solution, so that the pores are filled. After evaporating the solvent, the active precipitates within the pores. The advantage of this approach is that the active is unable to crystallize because there is not enough space in the mesopores for crystallization (known as the “space restriction effect”). It has been shown that actives can remain in the amorphous state in silica powders for up to seven years (2).

The skin delivery mechanism of smartPearls

The loaded smartPearls can be incorporated into the water phase of gels or oil-in-water (o/w) creams. They can be mixed into the finished product, such as with the o/w creams. Alternatively, in the case of gels, they can be added to the water phase before gelation. The particles are then evenly distributed in the gel. After admixture, a part of the amorphous active dissolves and generates a supersaturated solution (Css) in the water phase (see Figure 2). In the case of creams, the dissolved actives will also partition into the oil phase. Following application on the skin, a high concentration gradient (Css-Cskin) is generated, leading to high passive diffusion. The amount of active diffused into the skin is immediately replaced by active dissolving out quickly from the pores (see Figure 2B). This concentration gradient is maintained until all the active have been released from the mesopores (see Figure 2C). For dermal fluid formulations, the preferable particle sizes are of a few µm (e.g., 2 µm), because they are more adhesive compared to larger ones and thus can provide prolonged delivery when applied onto the skin.

Nanocrystals can be considered as the gold standard in penetration enhancement of poorly soluble actives (3). For rutin, a flavonoid with anti-oxidative properties, an increase in activity in the skin by a factor 1000 was shown, compared to a formulation with a water-soluble rutin derivative. At 1/500ththe concentration of rutin dissolved from nanocrystals, a two-fold increase in sun protection factor (SPF) was observed in a human study with irradiated volunteers (4).

The authors compared the performance of amorphous rutin in smartPearls with rutin nanocrystals and rutin microcrystals. To avoid animal studies, penetration was assessed using skin from porcine ears, and a tape stripping test was performed as a predictive test for skin penetration.

Drug developers of dermal formulations are becoming more reluctant to use nanoparticles in their products because of the increasingly stringent regulatory safety requirements for nanoparticle-containing products. According to the EU cosmetic regulation (6), for example, nanoparticulate ingredients must be declared, such as the case of titanium dioxide used in sunscreens. Because smartPearls are microparticles, no “nano” declaration is necessary for the final product. In addition, silica particles are already used and well established in dermal products, such as gels and transdermal patches. In the case of smartPearls, these silica particles are loaded with actives or drugs. In contrast to synthetic polymeric porous particles, they are a natural material-an aspect of increasing importance for dermal products.

The smartPearls approach provides an enabling technology for delivering molecules to the skin, especially for new chemical entities that cannot be efficiently delivered into the skin with traditional dermal formulations. It also may be used as a lifecycle management/extension strategy for pharmaceutical products when a patent protection expires.

When referring to this article, please cite it as R. H. Müller, B. Herziger, F. Monsuur, and S. M. Pyo, " A Novel Amorphous Delivery System to the Skin for Poorly Soluble Actives," Pharmaceutical Technology 42 (6) 2018. 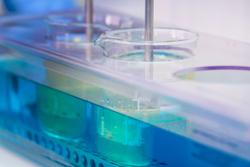