As a new year begins, what may be on the horizon for 2013 for the biopharmaceutical/pharmaceutical companies and their suppliers? A look ahead into what issues are shaping the industry.

A recent analysis by the management-consulting firm Ernst & Young says that the widening growth gap faced by Big Pharma increases the likelihood on increased M&A activity, but that prospect is tempered by competition for attractive acquisition targets and diminished resources (1).

“While the dynamics of the pharma industry remain fluid, the deal environment in 2013 and beyond will be more complex and competitive,” said Glen Giovannetti, Ernst & Young’s global life sciences leader, in a recent Ernst & Young press release. “Life sciences companies that are positioned appropriately should benefit from increased competition and see higher premiums. However, the finite resources of many Big Pharma companies and the need to make prudent acquisitions to address the immediate growth gap mean they will likely be even more selective about the targets they pursue.”

With continued flat sales in mature markets Big Pharma, defined as the 16 largest US, European, and Japanese pharmaceutical companies measured by revenue, has increasingly looked to emerging markets to drive overall revenue growth. A slowdown in these markets as a result of various factors has widened the “growth gap” facing the industry, according to the Ernst & Young report. By comparing the gap between IMS Health’s forecast for the global drug market and industry analysts’ estimates of Big Pharma sales during the next three years, Ernst & Young estimates that this growth gap will reach approximately $100 billion by 2015. This situation means that Big Pharma will need an additional $100 billion in revenue in 2015 just to keep up with overall market growth, according to the Ernst & Young analysis.

Due to a flat outlook in developed markets—in part a result of stagnation in the euro zone—and a slowdown in emerging markets, sources of organic growth are under pressure, according to the Ernst & Young analysis. As a result, many Big Pharma companies are likely to accelerate their search for inorganic growth through M&A in 2013.  The financial capacity of Big Pharma to conduct such deals, however, has diminished in recent years due to less available operating cash resulting from slower revenue growth, attributable partly from continued pressure on drug pricing, and increased borrowing to fund higher dividends, stock repurchases, and previous transactions. According to Ernst & Young, the financial capacity or “firepower” of Big Pharma to conduct deals declined by 23% between 2006 and 2012.

Even as Big Pharma’s deal-making ability has shrunk, the firepower of Big Biotech and specialty pharmaceutical (including generic-drug) companies has increased. According to Ernst & Young’s Firepower Index, between 2006 and 2012, the “firepower” of Big Biotech increased by 61% while specialty pharma’s firepower was up 20%. As a result of these shifts, Big Pharma’s share of the combined acquisition capacity of these three segments fell from 85% in 2006 to 75% in 2012.

In addition to a more competitive and complex deal environment, the Ernst & Young report identifies several key trends for transactions in the coming months and years as follows: 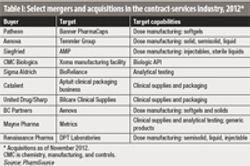