Boom or Bust for Pharma on a New US-EU Trade Pact?

Negotiations begin this week on the Transatlantic Trade and Investment Partnership, a new trade pact between the United States and European Union. What will be the implications for the pharmaceutical industry?

The first round of the trade and investment talks for the Transatlantic Trade and Investment Partnership (TTIP), a new trade pact between the United States and the European Union, began this week in Washington DC. The agreement, which would be the largest bilateral trade deal ever negotiated, would also have important implications for the pharmaceutical industry.

Genesis of the negotiations

The first round of TTIP negotiations beginning this week in early July 2013 is the result of a multiyear effort between the US and EU. The Transatlantic Economic Council (TEC) was set up in 2007 to guide and stimulate the work on transatlantic economic convergence. The TEC is a high-level forum between the EU and US for discussing economic issues of mutual interest and for serving as a platform to give political guidance and direction to this work. The TEC also provides a political forum for discussing strategic global economic questions. The TEC brings together members of the European Commission and US Cabinet Members who carry the political responsibility for closer economic ties. Three "advisory" groups have been set up to help guide the work of the TEC: the Transatlantic Legislators’ Dialogue, the Transatlantic Consumer Dialogue, and the Transatlantic Business Dialogue.

In November 2011, the TEC established a High-Level Working Group on Jobs and Growth (HLWG) led by EU Trade Commissioner Karel De Gucht and US Trade Representative Ron Kirk. The HLWG was tasked to identify policies and measures to increase EU-US trade and investment to support mutually beneficial job creation, economic growth, and international competitiveness. Leaders asked the HLWG to work closely with all public and private sector stakeholder groups and to draw on existing dialogues and mechanisms as appropriate.

The HLWG provided an interim report in June 2012 and a final report in February 2013. The HLWG reached the conclusion that a comprehensive agreement that addresses a broad range of bilateral trade and investment issues, including regulatory issues, and which contributes to the development of global rules, would provide the most significant mutual benefit of the various options considered. The US and EU endorsed the recommendation and announced that each side will initiate the internal procedures necessary to launch the TIPP agreement. On June 14, 2013, the member states of the EU gave the European Commission the green light to start the talks with the US, and the negotiations have begun this week.

The impetus behind TIPP is to remove trade barriers between the US and EU as a means to stimulate investment, production, and trade between the two regions. A pact hopes to build on an already strong relationship between the US and EU. According to information from the EC, the EU and the US economies account together for about half the world’s gross domestic product (GDP). Total US investment in the EU is three times higher than in all of Asia. EU investment in the US is approximately eight times the amount of EU investment in India and China together. Also, current EU-US trade is an important part of individual company growth. It is estimated that one-third of the trade across the Atlantic consists of intra-company transfers, according to the EC.

“Our aim is to release the untapped potential of a comprehensive transatlantic trade and investment partnership (TTIP) by bringing our economies closer together than ever before,” said EU Trade Commissioner Karel De Gucht in a June 14, 2013 EC press statement. “We will achieve this through increased access to the US market, by working with the US towards setting global standards and by greater compatibility between our respective regulations. In short, this deal will be about streamlining our economies where it makes sense to do so by making it easier and faster for our companies to do business together.”

Given the low average tariffs (under 3%) between the US and EU, the key focus to TIPP lies in the tackling of non-tariff barriers. These consist mainly of customs procedures and behind-the-border regulatory restrictions. The non-tariff barriers come from diverging regulatory systems (standards definitions notably), but also other non-tariff measures, such as those related to certain aspects of security or consumer protection, according to the EC.

An economic study by the EC projects that if such a trade pact were to be implemented that EU exports to the US would go up by 28%, equivalent to an additional EUR 187 billion ($240 billion) worth of exports of EU goods and services. EU and US trade with the rest of the world would also increase by over EUR 33 billion ($42 billion). Overall, the extra bilateral trade between the two blocs, together with their increased trade with other partners, would represent a rise of 6% in total EU exports and of 8% in US exports. This would mean an additional EUR 220 billion ($282 billion) and EUR 240 billion ($308 billion) worth of sales of goods and services for EU- and US-based producers, respectively, according to the EC report.

An in-depth study by the Centre for Economic Policy Research, a London-based research group that was commissioned by the EC to examine the impact of TIPP, also provided favorable outcomes on the potential effects on TIPP. If the agreement is fully implemented, an ambitious and comprehensive trans-Atlantic trade and investment partnership could bring significant economic gains as a whole for the EU at EUR 119 billion ($153 billion) a year and the US at EUR 95 billion ($122 billion) a year. The report also finds that liberalizing trade between the EU and the US would have a positive impact on worldwide trade and income, increasing GDP in the rest of the world by almost EUR 100 billion ($128 billion). “To the extent that the EU and the US can work together towards better trade rules and less regulatory divergence in the future, some of the reductions achieved in the cost of doing trade will also benefit other partners,” said the report. “The economic importance of the EU and the US will mean that their partners will also have an incentive to move towards the new transatlantic standards. This has the potential to spread gains across the global economy, which is increasingly interdependent especially given the ever greater complexity of global value chains.”

Pharmaceuticals constitute one sector seeking to benefit from more robust bilateral trade. Total bilateral trade in goods between the EU and US in 2011 amounted to EUR 455 billion ($583 billion). The US was the EU's third largest supplier, selling it representing around 11% of total EU imports and the EU's main export market, representing around 17% of total EU exports. These trade flows are complemented and supported by a dynamic investment climate and activity. In 2011, US companies invested around €150 billion ($192 billion) in the EU and EU firms approximately EUR 123 billion ($158 billion) in the US. On the pharmaceutical side, US exports of pharmaceuticals on a global basis totaled $48.6 billion in 2012, according to the American Chemistry Council (ACC), and US imports of pharmaceuticals were $89.0 billion. 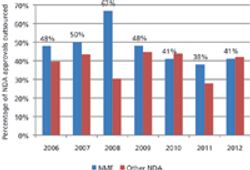