CSR and Sustainability in the News

A roundup of developments in corporate social responsibility (CSR) and sustainability from the bio/pharmaceutical industry, its suppliers, and other public and private organizations

Abbott and its foundation, the Abbott Fund, and Direct Relief International reported on a milestone of distributing 20 million rapid HIV tests free of charge to HIV testing and counseling programs serving pregnant women and their families in 43 developing countries. Expanding HIV testing for pregnant women is an important component in helping to prevent mother-to-child transmission (PMTCT) of HIV, a key focus in the global effort to combat HIV/AIDS. To facilitate access to HIV testing for PMTCT, Abbott and the Abbott Fund made a commitment in 2002 to donate 20 million rapid HIV tests to programs in Africa and the world's least developed Countries. To date, more than 150 partner organizations have participated in the program, serving more than 8000 health facilities. As a result, a minimum of 150,000 new cases of HIV have been averted in infants during the past ten years. Globally, there were approximately 1.4 million pregnant women living with HIV in low- and middle- income countries in 2010, according to the World Health Organization. The 22 highest affected countries account for 90% of the new HIV infections in children. In 2005, only 15% of HIV-positive pregnant women in low- and middle-income countries received antiretroviral therapies for PMTCT; in 2010, that number rose to 48%.

BASF reports that its SELECT (Sustainability, Eco-Labeling and Environmental Certification Tracking) Eco-Label Manager has nearly tripled in size to 270 programs, up from 100 programs a year ago. The SELECT Eco-Label Manager is a database that manages eco-labels, environmental claims, directories, and ratings systems by allowing users to search, analyze, and compare these programs in a structured and consistent format. The database is available online and is free to registered participants, including BASF customers. There are currently more than 480 registered users of SELECT from 30 different countries.

Bayer USA Foundation Executive Director Rebecca Lucore has been named as one of the 100 Women Leaders of STEM by STEMconnector. The honor includes the publication of a compilation of women across all industries in the United States that have demonstrated leadership and advocacy for STEM (science, technology, engineering and mathematics) education.100 Women Leaders in STEM is the first annual publication that features and profiles CEOs, presidents from the public and private sectors, leaders in education and key government officials who have demonstrated vision, leadership and progress in advancing STEM education.

Baxter International has issued its 2011 Sustainability Report. The company has reduced greenhouse-gas emissions by 7% percent since 2005 due in part to renewable-energy strategies such as using biomass fuels rather than fuel oil. For example, Baxter’s Alathur and Waluj, India, facilities use coconut shells, rice husks, and sugar-cane remnants as energy sources in boilers, which decreases fossil-fuel related greenhouse gas emissions, reduces energy costs and contributes to the local economy. The company also has reduced absolute water use by 6% 2005, primarily through water-conservation strategies. For example, Baxter’s Atlacomulco, Mexico, facility, located in a water-stressed region, reduced absolute water use by 26% compared with 2010 through innovative water reuse projects. Additionally, the company contributed by more than $80 million in combined giving from Baxter and the Baxter International Foundation, the company’s philanthropic arm, to increase healthcare access through product donations in 75 countries in 2011. Strengthening access to healthcare is one of the company’s sustainability priorities, which also include enhancing math and science education, and a range of environmental initiatives such as reducing greenhouse gas emissions, waste generation, and water use

The Bristol-Myers Squibb Foundation has awarded $6 million in additional grants through its Together on Diabetes initiative, a five-year, $115 million initiative of the Bristol-Myers Squibb Foundation to improve health outcomes of adults living with Ttype 2 diabetes to better manage their disease and make behavioral changes that can improve their overall health. The National Council on Aging will receive $4.87 million over three years to demonstrate a nationally scalable model for the Stanford Diabetes Self-Management Program online and in community settings in partnership with the national YMCA, OASIS Institute, WellPoint and Stanford University. In addition, the Center for Health Law and Policy Innovation at Harvard Law School will receive $981,862 over four years to develop comprehensive state-level policy recommendations for eliminating barriers to care, improving outcomes and enhancing healthcare policy for patients with Type 2 diabetes as part of the center’s Providing Access to Healthy Solutions (PATHS) initiative. PATHS will work on two levels. First, the center will conduct an in-depth state-based pilot program in Mississippi, New Jersey and North Carolina whose goal is to produce state-level advocacy and policy recommendations. Those recommendations will then serve as a roadmap for ongoing advocacy efforts in other states through a broader information- and network-building effort with Together on Diabetes grantees across the country. Sixteenth Street Community Health Center in Milwaukee, Wisconsin, will receive $295,615 over three years to help Hispanic patients with Type 2 diabetes who have fallen out of a doctor’s care for their diabetes at least twice in a 12-month period to reconnect to care, drawing lessons on linkage to care models used for people living with HIV/AIDS.

In addition, the Bristol-Myers Squibb Foundation announced a $15-million expansion of Together on Diabetes in China and India. The Chinese Center for Disease Control and Prevention (China CDC) will receive $709,016 over three years to enhance the capacity of rural health care providers to manage and prevent Type 2 diabetes at the village level in Western China, where diabetes is growing faster than in China’s cities and where rising medical costs are an important factor leading to poverty. China CDC’s efforts will focus on identifying high-risk rural populations and ensuring timely intervention to prevent onset of disease; standardizing training courses for diabetes prevention and control in rural settings; enhancing disease awareness and health education and using technology in rural communities to improve patient-self management; and mobilizing government and community leaders to prioritize management of Type 2 diabetes Shanghai Charity Foundation will receive $522,797 over three years to create an efficient and effective community-based, block-by-block approach for managing type 2 diabetes in Shanghai. The first Together on Diabetes grants in India will be announced later.

Dow Chemical announced Omega-9 Oils as its first Breakthrough to World Challenge, addressing one of the company’s 2015 Sustainability Goals in the area of health. As part of its 2015 Goals, Dow committed to achieving at least three breakthroughs that will significantly help solve world challenges in the areas of energy and climate change, water, food, housing and health. Omega-9 Oils have zero trans fat and the lowest amount of saturated fat among commonly used cooking oils, including corn, cottonseed, palm, peanut and soybean, according to the company. Derived from Dow subsidiary Dow AgroSciences’ the company’s Nexera canola and sunflower seeds, Omega-9 Oils are used by the food processing and food service industries.

Eli Lilly donated $100,000 to the Diabetes Scholars Foundation to assist the foundation in funding for its 2012 college scholarship grantees. The recipients, all young adults with Type 1 diabetes, are students who are actively involved in the diabetes community, who have high academic performance, who participate in community and/or extracurricular activities and who have demonstrated that they are successfully managing the challenges of living with diabetes.

In June 2012, more than 20,000 employees of Roche from 113 Roche sites marked the International Day of the African Child by walking and collecting donations for children in need as part of the 9th Roche Children’s Walk. Since its inception in 2003, this global event takes place annually to raise awareness and funds for vulnerable children. Half of the money raised is designated to support care centers for HIV/AIDS orphans and educational initiatives in Southern Malawi, long-term projects in which Roche cooperates with the European Coalition of Positive People (ECPP), as well as UNICEF Switzerland and UNICEF Malawi. The other half of the funds are designated to local charities for children in affiliate communities by the participating site. Roche matches the donations raised.

TB Drug Accelerator (TBDA) has been launched as a partnership by seven pharmaceutical companies (Abbott, AstraZeneca, Bayer, Eli Lilly, GlaxoSmithKline, Merck & Co., and Sanofi), four research institutions (the Infectious Disease Research Institute; the National Institute of Allergy and Infectious Diseases, part of the US National Institutes of Health; Texas A&M University; and Weill Cornell Medical College) and the Bill & Melinda Gates Foundation with the aims to speed the discovery of essential new treatments for tuberculosis (TB). TBDA will target the discovery of new TB drugs by collaborating on early-stage research. The long-term goal of the TBDA is to create a TB drug regimen that cures patients in only one month. Existing drugs, all at least 50 years old, require six months to cure the disease, a lengthy process that contributes to 20-30% of patients dropping out before completion. Aided by nearly $20 million from the Gates Foundation, partners officially launched the TBDA in April and have begun the first round of screening for new TB drug candidates. The TBDA aims to develop five new preclinical drug candidates with treatment-shortening potential within five years and proof-of-concept for a one-month three-drug regimen within 10 years.

The UN at the Sustainability Table 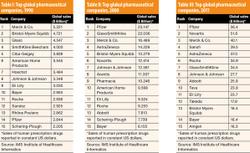 Decades of Change for the Top Pharmaceutical Companies