Development of a Validated Method of Testing for NDMA in Ranitidine

This article describes a validated method, using liquid chromatography/mass spectrometry, for detecting the carcinogenic impurity NDMA (N-nitrosodimethylamine) in ranitidine that meets and exceeds FDA’s limit of detection and limit of quantitation requirements.

In April 2020, FDA banned sales of the antacid, Zantac, and equivalent generic versions containing the active ingredient ranitidine after discovering that the products were contaminated with the carcinogen, N-nitrosodimethylamine (NDMA).

As a result, and because of previous recalls stemming from nitrosamine contamination in valsartan and other sartan angiotensin II receptor blockers, more stringent regulations are now in place for detecting and quantifying this impurity in both drug substance and final drug product. This article describes a validated liquid chromatography/mass spectrometry method for detecting NDMA in ranitidine that meets and exceeds FDA’s limit of detection and limit of quantitation requirements.

Since 2018, FDA and other regulators have found N-nitrosodimethyl-amine (NDMA) in several sartan- and ranitidine-based drug substances and products (1,2), resulting in widespread recalls of sartans and a ban on the sale of ranitidine. Nitrosamines, including NDMA, are mutagenic and capable of causing irreversible damage to human DNA, potentially leading to cancer.

NDMA can be introduced into finished drug products during API manufacturing processes. Global regulatory agencies, such as FDA, China’s State Food and Drug Administration (SFDA), and the European Medicines Agency (EMA), are strengthening regulations to prevent the manufacture and sale of drugs that contain nitrosamine impurities, to ensure pharmaceutical drug product quality, efficacy, and safety.

Nitrosamine impurities are often introduced in the following ways during API manufacturing:

In 2019, FDA noted that heating ranitidine samples during GC/MS analysis generated elevated levels of NDMA. To avoid false positive results with ranitidine, the agency published an
LC/HRMS method (7) as well as a liquid chromatography–tandem mass spectrometry (LC/MS/MS) method (8) for the detection and quantitation of NDMA in both ranitidine drug substance and drug product. The latter LC/MS/MS method was based on a triple-quadrupole platform.

Triple-quadrupole LC/MS-based methods are very specific and highly sensitive, serving as the reference technique for methods developed to detect and quantify intended compounds of interest. Because the triple-quad platform is more widely available than the LC/HRMS platform, the LC/MS/MS method can be used as an alternative confirmatory method for evaluating NDMA in ranitidine drug substances and products.

The method described in this article was carried out on the 6470 triple quadrupole LC/MS system (G6470A) with an atmospheric-pressure chemical ionization (APCI) source, providing analysis of NDMA at very low (i.e., 0.1 ng/mL or 0.0033 ppm) detection limits.

Nitrosamines can be ionized using electrospray ionization (ESI); however, due to the low molecular weight of NDMA and other nitrosamines of interest, baseline interferences are more strongly observed in ESI, compared with APCI.

APCI-based ionization is also less prone to matrix effects and is thus more suitable for semi-polar or non-polar compounds than ESI. Polar matrix peaks do not appear in its background. However, some nitrosamines (e.g., NMBA) may respond better to ESI. If a common method is required for the simultaneous detection of multiple nitrosamines, APCI is the preferred ionization mode.

The NDMA standard used in this study was sourced from PS3 Labs LLP (Hyderabad, TS, India). Accurately weighed drug substance (120 mg) was placed into a 15-mL centrifuge tube and diluted into 4 mL of water. The solution was then mixed using a vortex mixer until the API had completely dissolved.

An appropriate number of tablets were crushed to obtain a target concentration of 30 mg/mL of API in water. The API powder was then transferred to a 15-mL centrifuge tube, and an appropriate volume of water was added to provide the target concentration. The solution was mixed for approximately 1 minute using a vortex mixer, then placed on a mechanical shaker for 40 minutes.

After thorough mixing, the sample was centrifuged for 15 minutes at 4500 rpm. The supernatant was collected after filtration using a 0.2-μm nylon syringe filter (9). Configurations for ultra high pressure liquid chromatography (UHPLC) are summarized in Table I.

Mass spectrometer configuration and source settings are given in Table II.

Linearity. ICH and the United States Pharmacopeia (USP) General Chapter <1225> guidelines recommend a minimum of five concentrations to establish linearity in an assay. In this study, NDMA was calibrated at 10 concentration levels ranging from 0.1 to 100 ng/mL, with results given in Table IV.

R2 values were greater than 0.9997 for NDMA, displaying excellent linear response throughout the concentration range. The limit of detection (LOD), limit of quantitation (LOQ), and range of this method demonstrated that the method was more sensitive than the FDA method as shown in Table V (8).

Ranitidine is chromatographically well separated (even at concentrations of 30 mg/mL) from NDMA. Figure 1a sketches the NDMA analysis method using LC/TQ.

Because ranitidine eluted after NDMA, a diverter valve was used to exclude the API, as shown in Figure 1b. The method is sensitive, reproducible, and robust because ranitidine does not enter the ion source of the mass spectrometer.

Accuracy and reproducibility. The calibration curve for NDMA (Figure 2) demonstrates an accuracy within 20% of the expected concentration level at the LOQ.

Calibration levels are shown in Table VI, and the reproducibility across all standard levels exhibited a relative standard deviation (RSD%) of less than 15%.

As clearly shown in Table VII, the resulting data are highly reproducible, witha RSD% of 0.62 at 1 ng/mL (which is FDA’s required LOQ) for nine replicates, including three bracketing standard injections.

Recovery. Method accuracy was also validated by spiked recovery of NDMA standard solutions into ranitidine API and drug product. The results are shown in Table VIII and Table IX. Recovery experiments were performed at higher concentrations, because both ranitidine API and drug product (in tablet form) already contained approximately 2.4 ng/mL and 24 ng/mL of NDMA, respectively.

Ranitidine was chromatographically well separated (even at a high concentration level of 30 mg/mL) from NDMA, thus a diverter valve was used to remove the API. API did not enter the mass spectrometer. Results suggest that an LC/MS/MS-based method provides a robust, reliable, and sensitive way to test for and quantify NDMA in ranitidine drug substances and APIs.

When citing to this article, please refer to it as: P.Angrish et al., "Development of a Validated Method of Testing for NDMA in Ranitidine," PharmTech 44 (10) 2020.

Parul Angrish is pharma marketing manager, Chander Mani is application engineer, and Saikat Banerjee is application and business manager for LCMS, all with Agilent Technologies, Inc. 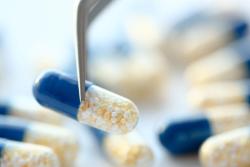