Although representing a small part of overall drug development, peptides and related technologies to improve their production are making inroads.

As a drug type, peptides offer certain benefits, such as specificity and potency, but they also present challenges, such as poor stability and short halflife. Recent partnerships among large pharmaceutical companies and specialised companies, as well as advances from academia, are seeking to resolve these problems.

Peptides and proteins have the size and functionality to effectively modulate intracellular protein–protein interactions, but they often do not permeate cells and, therefore, are used to modulate extracellular targets such as receptors (1, 2). According to a recent analysis of the peptide drug pipeline by the Peptide Therapeutics Foundation (3), the majority of peptide candidates target extracellular molecules with less than 10% binding to intracellular targets. The most common extracellular targets were G-protein coupled receptors (GPCR), which include nearly 1000 transmembrane proteins that activate cellular response. During 2000–2008, 60% of peptides entering clinical development targeted GPCRs and most had agonist activity (3).

Although making up only a small portion of total drug candidates, the number of peptide drugs entering clinical development has increased during the past several decades. The Peptide Therapeutics Foundation analysis, which excluded insulins, found that the average number of new peptide candidates entering clinical development in the 1970s was 1.2 per year, rising to 4.6 per year in the 1980s, 9.7 per year in the 1990s and 16.8 per year through 2000–2008 (3). During 2000–2008, peptides entering clinical study were most frequently treatments for cancer and metabolic disorders (including diabetes and obesity), respectively, representing 18% and 17% of peptide drug development. Decreases were observed for peptides studied as therapies for treating allergies, immunological disorders and cardiovascular diseases.

On a commercial level, several peptide-based therapeutics have reached blockbuster status, defined as having sales of $1 billion or more, or near blockbuster status (3). These drugs, using 2011 global sales figures from company annual financial reports, include:

Stapled peptides use peptide-stabilisation technology to enhance potency and cell permeability of a drug to address pharmacological limitations of small molecules and existing biologics in intracellular protein–protein interactions. Although small molecules can penetrate cells, the large binding surfaces for intracellular protein–protein interactions often make small-molecule modulators ineffective. As cited previously, peptides cannot permeate cells so act extracellularly (1, 10). Stapled peptides seek to resolve this problem. Because many undruggable therapeutic targets include those protein–protein interactions, in which alpha-helices are required in lock-and-key-type mechanisms, an approach is to design alpha-helical peptides that have structural and functional properties that enable them to penetrate into the cell, bind to the therapeutic target and modulate the biological pathway (1, 10). Aileron stabilises peptides by "stapling" them with hydrocarbon bonds into an alpha-helix. Once constrained in the alpha-helix structure, the peptides are protected from degradation by proteases. The stabilised alphahelical peptides can penetrate cells by energy-dependent active transport and typically have a higher affinity to large protein surfaces (1, 2, 10).

Researchers at the New York Structural Biology Centre recently reported on high-resolution solution nuclear magnetic resonance techniques with dynamic lightscattering to characterise a family of hydrocarbon-stapled peptides with known inhibitory activity against HIV-1 capsid assembly to evaluate the various factors that modulate activity. The researchers reported that helical peptides share a common binding motif, but differ in charge, the length and position of the staple. The research showed that the peptides share a propensity to self associate into organised polymeric structures mediated predominantly by hydrophobic interactions between the olefinic chain and the aromatic side-chains from the peptide. The researchers also detailed the structural significance of the length and position of the staple and of olefinic bond isomerisation in stabilising the helical conformation of the peptides as potential factors influencing polymerisation (11).

Cyclic peptides. In April 2012, researchers at Carnegie Mellon University (Pennsylvania, USA) reported on their manufacturing method for producing a synthetic form of a cyclic peptide. Macrocyclic peptides with multiple disulphide crosslinkages, such as those produced by plants and those found in nonhuman primates, hold potential as drugs because of their broad biological activities and high chemical, thermal and enzymatic stability (12). Because of their intricate spatial arrangement and elaborate interstrand crosslinkages, some macrocyclic peptides are difficult to prepare in large quantities and high purity because of the nonselective nature of disulphide-bond formation (12).

In the current study, the Carnegie Mellon researchers focused on RTD-1, a cyclic peptide held together by three disulphide bonds. RTD-1 has a broad range of antibacterial, antifungal and antiviral capabilities, and has been shown to inhibit HIV from entering cells. The researchers created a mimic of RTD-1. While the outside of the mimic peptide maintained the same amino acids as the original, the researchers replaced the disulphide bonds at its centre with noncovalent Watson–Crick hydrogen bonds without significantly affecting the biological activity of the peptide. The researchers say the work provides a general strategy for engineering conformationally rigid, cyclic peptides without the need for disulphide-bond reinforcement (12).

They tested the efficacy of the mimic RTD-1 by mixing the peptide with Escheria coli, Listeria,Staphylococcus and Salmonella— bacteria that RTD-1 typically protects against. The mimic proved to be effective in killing each of the types of bacteria tested by the researchers, which included both gram-positive and gram-negative bacterial strains. Furthermore, the mimic peptide worked by binding to the bacteria's cell membrane, not its DNA or RNA, decreasing the probability that the bacteria could develop resistance to the peptide. The researchers plan to see if the mimic RTD-1 is effective against other types of pathogens, including antibiotic-resistant bacteria. They also plan to apply their method to manufacture mimics of other cyclic peptides.

Other approaches. In 2011, the biopharmaceutical company Sutro Biopharma formed a multiyear collaboration with Pfizer for the research, development and commercialisation of novel peptidebased therapeutics. The partnership gives Pfizer access to peptides that have been difficult to produce using conventional technologies using a biochemical protein synthesis technology platform developed by Sutro. In 2008, Pfizer acquired CovX, a biopharmaceutical company with a technology platform that links therapeutic peptides to an antibody scaffold. The peptide targets the disease while the antibody scaffold allows the peptide to remain in the body long enough to achieve therapeutic benefit. The technology thereby allows for better half-life extension and bioavailability to support optimal dosing regimens for peptide therapeutics. 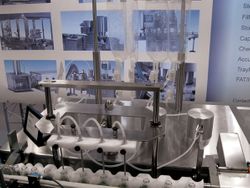 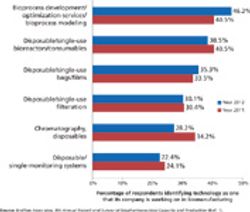