The operator manually loads thermoformed trays into high-capacity tray magazines. Syringes enter the starwheel infeed via an infeed track that connects to the syringe-filling equipment at a rate of 125 syringes per minute. A starwheel picks syringes and lays them in carriers on the infeed conveyor. The first FANUC robot uses vacuum EOAT to pick a tray and, with the help of line tracking, places it on the lugged tray transport conveyor. A second robot, also equipped with line tracking, picks five syringes from the syringe infeed conveyor, loads three in the tray, and rotates the remaining two syringes 180-degrees before placing them to complete the tray. Any missed syringes fall into a soft discharge bin to be manually re-introduced into the robotic tray-loading cell.

Loaded trays convey to a tamping station that gently presses all five syringes into their locking cavities. At the discharge, a third FANUC robot uses a hybrid vacuum/gripper EOAT to rotate a tray and stack it on the tray that follows. The robot then picks both trays and places them on a discharge conveyor for downstream inspection and cartoning. 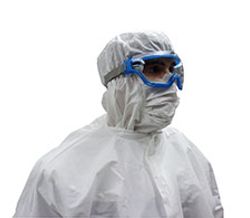 Sterile, Integrated Hood and Mask for Larger Heads and Hairstyles 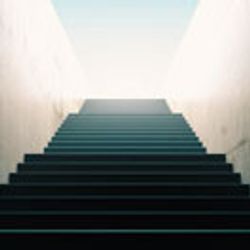