A. Solubility and speed of dissolution can be influenced by various excipients. Here, I would distinguish between excipients that act directly on the active and those, such as disintegrants, that simply ensure quick disintegration of the dosage forms. The first class is represented by wetting agents, solubilizers, protective colloids, adsorbents and so forth. All of these can contribute to improved dissolution, the strongest effect coming from solubilizers. Solubilizers are typically surfactants of a relatively low molecular weight, such as Polysorbate 80, Kolliphor® EL (formerly Cremophor® EL) and many other ethoxylated materials. With the launch of Soluplus® in 2009, the first polymeric solubilizer appeared on the market offering new opportunities, particularly for tablets.

Q. What are the key properties of an excipient to determine whether it will be an effective solubilizing agent? What type of pharmacodynamic and pharmacokinetic data is used to evaluate solubility and bioavailability, and what is the influence of the excipient on these levels?

A. The main prerequisites for a solubilizer/bioavailability enhancer are that it is capable of overcoming the crystal lattice energy of a drug and that it can be delivered into the aqueous fluids of the GI-tract. Taking into account that the ideal excipient has to act as a bridge between the high lipophilicity of the poorly soluble active and the high hydrophilicity of aqueous fluids, it should be amphiphilic.

At the end of the day, in-vitro dissolution studies must be accompanied by in-vivo studies in animals or humans to reveal whether improved dissolution really leads to enhanced bioavailability. To give you an example of what excipients can generate: a Soluplus® -itraconazole formulation resulted in 25-fold higher bioavailability than itraconazole alone and outperformed the marketed drug by a factor of 2.3. This shows the potential associated with unique excipients.

Q. What type of predictive tools can be used to evaluate the optimal levels or type of excipient(s) to be used in a formulation with respect to bioavailability enhancement?

A. There are screening methods available which can be used to find the best solubilizer for a particular active such as the solubilizing power in aqueous solution and the solid solution capacity. These tests, which are described in detail in the BASF booklet "Hot-Melt Extrusion Compendium" determine how much drug can be dissolved either in the aqueous or solid phase, which is mainly the polymer. From the results of these tests, a preliminary formulation can be derived which of course needs to be further optimized not only regarding performance but also processing.

Q. What role can excipients play with respect to certain technologies such as hot-melt extrusion, as an approach in resolving solubility challenges? Do they facilitate the formation of the solid dispersion? Can the excipient also facilitate processing in a hot-melt extrusion process? Can you offer specific examples of either application?

A. For the preparation of solid dispersions or solid solutions, two technologies have become popular so far: hot-melt extrusion and spray drying with organic solvents. These are completely different from a processing point of view and also have different requirements.

For hot-melt extrusion, a low glass-transition temperature and low melt viscosity enable processing at lower temperatures to be carried out, thus avoiding drug degradation. Soluplus® for instance was developed especially for hot-melt extrusion and fulfills this target profile ideally. There is no other material that runs so smoothly on an extruder and that is able to take up so much poorly soluble active.

Q. Poor solubility is an obvious barrier to advancing potentially efficacious drug candidates. Looking into the future of solubilization, what key technologies are currently being employed and which are being evaluated for further development? What role will excipients play in those efforts?

A. Hot-melt extrusion is currently in the stage of becoming a mature technology in pharma; however, this process can still be modified further to obtain even better results. Furthermore, new solubilizers with unique properties need to be developed so that all kinds of poorly soluble actives can be addressed. The area of nanoformulations, for example, has not been fully explored.

However, one of the biggest hurdles facing industry is the regulatory issue of using a new excipient. There is some reluctance to use a new excipient for the first time. A Novel Excipients Consortium of pharmaceutical companies and excipient suppliers has just been created with the specific aim of paving the road for new excipients. To use the words of Martin Luther King, "I have a dream" that one day excipients will have their own approval process. This achievement would remove the risks from pharmaceutical companies and their drug approvals, speed up drug development, innovate formulations, and ultimately improve treatments. 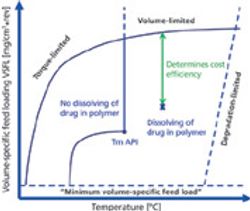