Particle morphology of magnesium stearate, added as an anti-caking agent in a high water‑soluble drug substance, has an influence on the dissolution rate of compressed tablets.

Magnesium stearate (MgSt) is the most commonly used lubricant in solid dosage formulations to improve the formulation processability. It may be used as an anti-caking agent when blended in lesser amounts with APIs with high caking potential as a pre-mix for further processing. This approach changes the surface properties of powders by dry coating it with hydrophobic materials to modify the surface energy and reduce particle interaction (1). This process uses shear and compression to produce a thin, continuous film of lubricant on the surface of the host avoiding the caking effect. But, this hydrophobic layer prevents water from penetrating into the tablet, thus restraining the disintegration and dissolution of the tablets (2).

MgSt is a naturally sourced excipient, and the excipient suppliers use a variety of processes to manufacture different MgSt grades for pharmaceutical applications. Not surprisingly, several studies have reported the presence of source-to-source, manufacturer-to-manufacturer, and lot-to-lot variability in the physical, chemical, and functional characteristics of MgSt (3).

Scanning electron microscopy (SEM) was used to study the agglomeration of the particles. A small amount of powder was prepared on an aluminium sample holder covered by a conductive double-faced adhesive tape. Non-adhered particles were removed from tape by compressed air. To avoid electrostatic charging, the sample was sputtered with platinum (layer thickness: ~10 nm). The prepared sample holder was added into a Leo 1530 scanning electron microscope (ZEISS), and the measurement was performed under high vacuum.

After blending, the pre-mix was allowed to settle for five minutes before unloading the mixer, to reduce material loss due to airborne particles.

Preparation of tablets. All tablets were prepared by the wet granulation method. The pre-mix was granulated with PVP dissolved in water as a binder agent using the 6 L Laboratory Mixer P 1/6 (Diosna Dierks & Sohne). The wet mass was dried using the fluid bed drier Minilab XP (Diosna Dierks & Sohne). Prior to tableting, the dried mass was milled using the conical mill Quadro Comil U3 (Quadro Engineering). The milled granules were formed into tablets using a Korsch XL tablet press (Korsch) equipped with 7 mm compression tooling and 10 mm overfill cam.

The machine setting was kept constant. Tableting speed was set to 10,000 tablets per hour, fill depth was set to obtain a tablet weight of 270 mg, and the main compression was controlled at 15 kN for all experiments.

Dissolution method. The dissolution profile of six tablets of each formulation were tested according to the European Pharmacopoeia (Ph. Eur.) 2.9.3 (5). Each tablet was placed in a vessel filled with 900 mL of purified water at 37 °C ± 0.5 °C. Apparatus 2, with paddles at 50 rotations per minute, was used for stirring. Aliquots were taken at 5, 10, 15, 35, 45, and 60 min and the API dissolved was quantified by ultraviolet-visible spectrophotometry.

To evaluate the effect of shear rate in the preparation of the pre-mix on the dissolution of immediate-release tablets, the Metformin HCl was blended in the mixing equipment with MgSt from different suppliers at high shear and low shear rates. The formulations were then compressed into tablets, and the dissolution profile of six tablets was tested.

Impeller, chopper speed, and mixing time were varied according to Table I. All other machine settings were kept constant during the experiment.

Table II depicts the SA measurements obtained by BET determination of MgSt samples. These samples were added in Metformin HCl and blended at high and low shear rate to prepare the free-flowing pre-mix. The pre-mix was used to prepare the immediateârelease tablets. The dissolution profiles of the tablets were tested.

Figure 1 depicts the images obtained by scanning electron microscopy (SEM) of MgSt samples, illustrating the difference in particle morphology. Figure 2 depicts the Metformin hydrochloride (HCl) dissolution profile of the tablets prepared with the pre-mix, with which the magnesium stearates (MgSt S1, MgSt S2, or MgSt S3) were blended. Figures 3–5 depict the Metformin HCl dissolution profile comparison of the tablets prepared with the pre-mix blended at high and low shear rates for each of the three MgSt types.

The SA plays a key role in the effect of the MgSt on the dissolution rate of some APIs from tablets. This effect is related to the ability of MgSt to cover the particles of the excipients and API during the tablet’s manufacturing process. As MgSt is not water soluble, an excessive coating may lead to a slower dissolution rate of the active ingredient from the tablet.

The samples of MgSt obtained from various vendors tested have different particle properties, such as specific surface area and particle morphology, as shown in Table II and Figure 1. MgSt S1 sample has the highest surface area of all, followed by the MgSt S3 sample. MgSt S2 sample has the lowest (see Table II).

Generally, it is expected that the slow-down of Metformin dissolution rate, due to the MgSt effect, increases on increasing the surface area of MgSt. The increase of surface area can provide more API coverage with the excipient, which is hydrophobic.

It is suggested, in specific literature, that particle morphology of some MgSt is often pictured as a deck of cards depending on the precipitation process during its preparation (6). During the blending process with active ingredients, carriers, or fillers, the ‘plates’ of MgSt dismantle from the decks, piece-by-piece, to coat other particles, depending on the particle morphology.

MgSt S2 particles are less susceptible to deagglomeration by shear rates during blending due to the more consistent and smoother morphology. MgSt S1 and MgSt S3 agglomerated flake particles, however, are more susceptible to being dismantled, increasing their coverage potential. The coverage by such a hydrophobic layer prevents water from penetrating into the tablet, leading to a slower dissolution rate when prepared with the pre-mix with MgSt S1 and MgSt S3.

The specific surface area is not the only driver for the potential coverage of MgSt particles over API and excipients, but particle morphology also plays a key role, mainly when MgSt is blended at higher shear rates with an API for further processing as a pre-mix. Agglomerated flake-like particles are more susceptible to being deagglomerated and have higher coverage potential than the more consistent and smoother particles, despite surface area. The increased coverage potential prevents water from penetrating into the tablets prepared with such a pre-mix, leading to a slower dissolution rate. 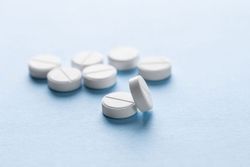