Single-use mixing equipment for GMP bioprocess manufacturing must be capable of effectively mixing buffers (i.e., sinking powders) and media (i.e., floating powders). Effective mixing can be a challenge, especially at high volume. Powder–liquid mixing requires good dispersion and dissolution of particles. To more fully understand the process space for mixing, it is useful to employ tools to measure mixing in both a qualitative and quantitative way. These tools include real-time monitoring probes for pH, conductivity, and particle count, along with means to better observe and record visual trends.

Real-time monitoring using probes inserted into the vessel can be used to track and record homogeneity throughout the vessel and are often used to measure mixing time, especially in liquid–liquid mixing. For example, addition of a small amount of concentrated salt solution into the larger vessel volume raises the conductivity of the liquid, first in a small area and then throughout the vessel as mixing proceeds. When the conductivity reading becomes stable (i.e., usually within +/-1%), the system is determined to be fully mixed. In a similar manner, when a small amount of concentrated acid or base is added to the system, the reaction to change pH starts in the local area of addition and continues throughout the entire volume as mixing occurs. Once again, when the pH reading is stable, the system is determined to be fully mixed. For powder–liquid mixing, similar measurements can be made, focusing on parameters affected by components in the powder, which are often conductivity or pH, but can also include osmolality or even measurements of the ultraviolet absorption spectrum of proteins (UV280). Conductivity and pH are most useful because in-line, real-time sensors are readily available.

ParticleTrack (Mettler-Toledo) is a probe-based instrument that uses a measurement technique called focused beam reflectance measurement (FBRM) to track particle size and count in real time. Using a laser beam launched down the probe tube through a set of optics, a light beam is focused into the process where particles flow across the probe window. As the optics rotate, the focused beam scans across the system, and individual particles or particle structures will backscatter the laser light to the detector. These distinct pulses of backscattered light are detected, counted, and used to calculate the distance across each particle, defined as chord length. Statistics from each chord length distribution, such as counts in fine and coarse size classes, can be trended over time. Powder distribution is reflected in reaching homogeneity in particle count, while powder dissolution is shown as particle count moves to a minimum.

Use of data from multiple probes in multiple locations and a record of visual mixing allow better understanding of the process space and allow design and operational parameters to be adjusted for optimal performance.

During the design and development of single-use mixing systems at MilliporeSigma, studies were performed to show the effect of key equipment and process variables on mixing time, including impeller size, impeller position, impeller rpm, rate of powder addition, location of powder addition, and liquid volume. Being able to quantify the effects of changing process parameters allows tailoring of the process to the customers’ specific needs, such as minimizing mixing time, foaming, or shear. This article outlines examples of using quantitative and qualitative tools to better understand the mixing process.

Novel methods for both qualitative and quantitative measurement of powder–liquid mixing, including powder dispersion and dissolution, were employed at MilliporeSigma. Use of acrylic prototype vessels during development provided a powerful tool for characterization of the mixing process because the clear walls allowed qualitative understanding of mixing, not only from the top of the tank, but throughout the entire volume. Measurement devices included real-time monitoring of traditional parameters, such as pH and conductivity. Probe ports were located at minimum working volume, along with probe placement at the top of the vessel, to provide a comprehensive documentation of the mixing process. Beyond traditional measurements, the ParticleTrack tracked changing particle size and count in real time. This instrument was key in not only tracking powder distribution, but also dissolution.

Vortex mapping. The first step in engineering the Mobius Power MIX systems (MilliporeSigma) was construction of acrylic tanks, with dimensions and equipment (e.g., impellers and motors) as models for the final design. These acrylic tanks provided the first qualitative evidence of the mixing potential for powder–liquid mixing. The generation of a strong vortex is vital to keeping sinking powders off the bottom of the vessel and allow the transport of floating powders off the liquid surface and into the bulk solution. Vortex height was measured at a range of speeds (i.e., impeller RPM) from 20% to 100% of maximum speed and at working volumes from 20% to 100% of the full volume in the 2000-L vessel, as plotted in the vortex map in Figure 1A. The vortex map allows an understanding of critical speeds and volumes to optimize powder–liquid mixing. Figure 1B shows the vortex in the clear tank at a range of speeds with an 1800-L working volume.

Monitoring conductivity. Traditional methods for quantifying a mixing process include measurement of a traceable parameter over time and identification of the time to a stable measurement. For most buffers and media, measurement of conductivity can be used to trace the concentration of powder in solution. To enhance this method, real-time monitoring provides an advantage over sampling, as does monitoring in multiple locations. The mixing of 1X Dulbecco’s Phosphate-Buffered Saline (DPBS) in the Mobius Power MIX 2000 was determined by measuring  conductivity in two key locations, at the top of the liquid volume and at the low volume of 300 L, where ports for sampling and probes are located. The advantage of monitoring at a one-second sample rate was evident in analyzing the traces during the first two minutes of mixing, as shown in Figure 2. The action of the sinking powder was clearly seen as an immediate spike in conductivity near the bottom of the vessel. As mixing progressed, the conductivity measurements at the minimum and maximum volumes converged to show a final homogeneous solution.

Sinking powders. Conductivity measurements alone do not always give the most complete picture of solid-liquid mixing, because this process involves both the distribution and dissolution of particles. Reaching a stable conductivity measurement will indicate complete distribution of the powder, but not complete dissolution. Visual records can be made to describe dissolution, but it is useful to have a quantitative measurement of powder dissolution. Measurement of particles, both size and count, can be accomplished through the use of the ParticleTrack FBRM technology.

To test the limits of the new mixer for use with sinking powders, a high concentration salt solution was created. A total of 144 kg of sodium chloride (NaCl) was added to 1600 L of deionized water, producing a final solution of 90 g/L (1.5M NaCl). Figure 3 provides a record of the mixing process, where conductivity measurements (Figure 3A) show a fully distributed powder within 5 min and visual mixing complete at 15 min when it is once again possible to see through to the bottom of the vessel (Figure 3B). Particle count corresponds to the visual record, reaching a minimum at 15 min, where distribution and dissolution are both complete.

Floating media powder. In another case study, mixing of a floating media powder was examined. A quantitative record of media mixing was created by collecting conductivity, particle count, and pH measurements obtained during mixing of a chemically-defined Chinese hamster ovary (CHO) medium (see Figure 4). In this case, conductivity reached a stable value at 15 min, when most of the floating powder was incorporated into solution. Once again, conductivity alone does not give the best record of mixing. At 25 min, with no visible powder on the surface, particle count peaked at a maximum value, indicating complete powder distribution into the bulk liquid. Dissolution of components in the chemically defined medium did not happen until the pH of the solution was adjusted up to pH 7. Here, the FBRM provided a striking record of particle count decreasing to zero with the increase in pH. The FBRM probe is sensitive enough to recognize air bubbles created during volume increase to 2000 L at 55 min, suggesting that FBRM can be used as an indicator for unwanted foaming. The use of multiple sensors is necessary to fully document the mixing process and quantify the mixing time beyond just visually mixed.

Both qualitative and quantitative measures of mixing can be used to characterize performance of mixing systems, allowing comparison among designs and confirmation of equipment performance. In addition, these data can be used to more fully understand the process space and allow parameters to be adjusted to achieve optimal performance in areas such as mixing efficiency, limitation of shear, or limitation of foaming. In addition, documentation of the mixing data can create a record for process development and regulatory demands. The ability to quantify the mixing process allows development of better equipment and processes.

Citation:
When referring to this article, please cite it as A. Hansen, " Evaluating Mixing in a Single-Use Bioprocessing System," Pharmaceutical Technology 40 (12) 2016. 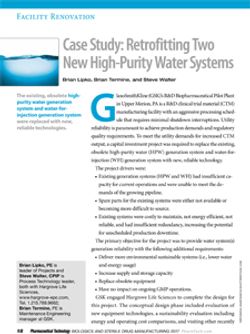