Research efforts around the world are demonstrating that the application of flow chemistry for small-molecule API synthesis.

In a blog posted on April 12, 2016, Lawrence Yu, FDA’s deputy director of the Office of Pharmaceutical Quality in the Center for Drug Evaluation and Research, expounded on the benefits of continuous manufacturing: greater reliability, safety, efficiency, responsiveness/flexibility, and reduced costs (1).

He stated, “Although it is not easy for drug manufacturers to transition from batch to continuous manufacturing, there are significant rewards. FDA encourages others in the pharmaceutical industry to consider similar efforts.”

Pharmaceutical companies are certainly interested as well, as indicated by the numerous reports of API synthetic methods designed to be operated under continuous flow conditions. A summary of selected processes is presented in the following.

Continuous-flow experiments
Researchers in China report a continuous-flow process for the preparation of m-nitrothioanisole via diazotization of m-nitroaniline to afford a diazonium chloride intermediate, which is then subjected to azo coupling with sodium thiomethoxide to give 1-(methylthio)-2-(3-nitrophenyl)diazene, followed by dediazonization to provide m-nitrothioanisole in high yield (2). A flow process was developed to minimize accumulation of the energetic intermediate diazonium salt and enable large-scale production.

The same scientists also developed a continuous flow process for the selective nitration of 1-methyl-4-(methylsulfonyl)benzene in 98% yield using 80 weight percent (wt%) sulfuric acid (3). The short residence time of 5 s led to a significant reduction in byproduct formation. Notably, the spent acid could be reused multiple times after concentration under a vacuum.

Swedish researchers established a protocol for the transcarbamylation/transesterification of sulfonylcarbamates with alcohols via microwave heating under continuous-flow conditions (4). Using transparent borosilicate tube reactors, the scientists prepared two series of O-alkylsulfonylcarbamates. They also applied the methodology to the synthesis of three angiotensin II type 2 receptor ligands.

Scientists at the University of Graz (Austria) and Noramco report the continuous flow production of hydrocodone from thebaine via selective olefin reduction to form 8,14-dihydrothebaine followed by hydrolysis (5). Selective transfer hydrogenation using hydrazine hydrate (N2H4•H2O) and O2 is not possible under batch conditions due to the high explosion potential of the reaction mixture. The reported continuous high-temperature/high-pressure method is efficient, safe, and scalable. The process involves four consecutive feeds of liquid N2H4•H2O with separate residence times for completion of the reaction in 1 h.

Researchers from The Netherlands developed an intensified, solvent-free continuous process for the conversion of alcohols to chlorides using hydrogen chloride gas (6). A separate dry zone was used to deliver the hydrogen chloride gas and prevent corrosion. Less than half the equivalents of HCl are needed due to the use of the gas instead of hydrochloric acid, and only water is generated as a byproduct. The reaction is typically complete within 20 min.

Scientists from Eli Lilly and Company and Vanderbilt University reported the conversion of a batch-based stereoselective aza-Henry reaction between an arylnitromethane and Boc-protected aryl aldimine using a homogeneous Brønsted acid-base catalyst to an automated intermittent-flow process with product crystallization and slow reagent addition (7). The organocatalytic enantioselective reaction included recycle of the catalyst, resulting in increased process intensity maintaining a high catalyst concentration in the reactor. The researchers performed a continuous campaign with the automated system and obtained high throughput and high selectivity while minimizing catalyst usage.

Researchers from Eli Lilly have also achieved a continuous Grignard reaction using a continuous stirred tank reactor (CSTR) (8). The process was developed after mapping the operation space using knowledge about CSTR process parameters, the reaction kinetics, magnesium (Mg) sequestration efficiency, equipment characterization, and the impact of process disturbances on steady-state conditions. A reaction kinetics model was also developed, and computational fluid dynamics (CFD) models were applied to the equipment design. This approach enabled the development of a highly robust and safe commercial-scale process.

Researchers at AztraZeneca, in combination with various European university groups, have focused on the development of continuous Buchwald-Hartwig reactions. In one report, the scientists used the highly active palladium N-heterocyclic carbene (NHC) precatalyst [Pd(IPr*)(cin)Cl] 4 (IPr* = 1,3-bis(2,6-bis(diphenylmethyl)-4-methylphenyl)imidazol-2-ylidene; cin = η3-cinnamyl), a universal approach for continuous workup and purification, and a methodology for catalyst recycling and reuse (9). Before implementing the flow reaction, the catalyst’s stability in water was investigated and an effective workup methodology was developed that allows separation of the Buchwald-Hartwig product into the aqueous stream as a salt while retaining the aryl bromide starting material in the organic stream with the catalyst.

The flow reaction was performed in a microreactor at the gram scale using continuous workup conditions involving acidic extraction of the product and on-stream recycling of the catalyst in the organic phase (10). The custom-designed rector for running heterogeneous reactions in flow combines the flexibility of CSTRs with the smooth operation, low residence time distribution and excellent heat transfer capability of a conventional flow reactor, according to the researchers.

Low-temperature batch to continuous processes
The conversion of low-temperature batch reactions to continuous processes is attractive because in many cases higher temperatures can be used to achieve equal or better results. For example, scientists from Eisai report the continuous production of eribulin mesylate via the diisobutylaluminum hydride reduction of an ester followed by n-butyllithium-mediated coupling of the resultant aldehyde to a sulfone fragment to afford a sulfone-diol as a key intermediate, all without the need for cryogenic conditions (11). The reduction was run at -50 °C instead of -70 °C, yet a better selectivity and yield were obtained, while the butyllithium-mediated coupling when run under flow conditions at 10 °C proceeded with a better conversion rate than the batch reaction when performed at -70 °C.

Meanwhile, scientists at Bayer Technology Services report the running of a continuous process for the lithiation of fluoroaromatics in a microreactor demonstration unit (12). A higher temperature was possible in this case, too, leading to higher space-time yields compared to those observed for the batch reaction. Temperature control was found to be critical, though; optimization was necessary to identify the most appropriate reaction conditions, hardware, and reactant purification methods to achieve minimal salt precipitation and prevent runaway conditions. 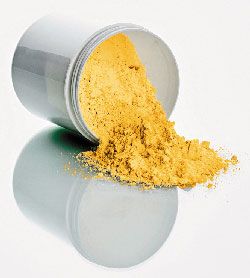