In this study, the authors describe a forensic microscopy approach to characterize particles that were visually observed during stressed stability testing of an ophthalmic solution formulation.

The United States Pharmacopeia (USP) states that ophthalmic solutions should be free of visible particulates upon inspection and meet the subvisible particulate matter requirements specified in USP Chapter <789>. In this study, the authors describe a forensic microscopy approach to characterize particles that were visually observed during stressed stability testing of an ophthalmic solution formulation. The particulate present in the formulation was chemically identified at low parts per million levels.

This report describes a microscopic investigative approach to characterize particles that were visually observed during stressed stability testing of an ophthalmic solution formulation. Topical ophthalmic solutions should be “essentially free” of visible particulates upon inspection as specified in the United States Pharmacopeia (USP).

Ophthalmic solutions are also required to meet subvisible particulate matter requirements per USP Chapter <789> at the time of product release and during stability testing to verify manufacturing cleanliness and support shelf life of the finished product (1). The analytical characterization work needed in cases where USP <789> failures occur is considered trace or ultra-trace analysis. For example, the USP <789> limit for particles between 10-25 µm is 50 particles/mL. In cases where the limit is exceeded due to a 20 micron needle-shaped particulate with a density of 1.5 g/cm3, the particulate level would correspond to approximately 2 parts per billion (ppb) on a concentration basis for a 5-mL fill size. Particle isolation and enrichment practices coupled with direct sample analysis using micro-analytical techniques are essential to productive problem-solving during particulate matter failure investigations due to the inherent trace concentration levels.

Forensic microscopy uses a progressive problem-solving approach to yield the maximum amount of information from consumption of a minimal amount of sample in an efficient manner (2). The investigation follows a careful, stepwise approach to limit contamination or loss of trace materials along the analysis pathway. Maintaining an “eye to sample” connection during sample handling is also essential. The testing progression typically follows this pathway:

Samples. The formulation of interest was an isotonic, buffered, and preserved solution of travoprost (0.04 mg/mL). Travoprost is a synthetic prostaglandin F analogue indicated for the reduction of elevated intra-ocular pressure. The formulation ingredients are listed in Table I.

A laboratory formulation of travoprost ophthalmic solution was prepared at pH 6.5 using commercially available ingredients. Aliquots of the formulation were placed in capped glass vials and stored in a 60 °C stability cabinet (Fisher Scientific, Isotemp Incubator, Model 650D). The samples were visually examined at regular intervals.

Polarized light and hot stage microscopy. The use of polarized light microscopy by a seasoned microscopist is a powerful identification method with many common environmental particle types such as fibers, skin flakes, and cellulosic materials capable of recognition by sight.

Infrared microspectroscopy. Infrared microspectroscopy can be used for identification of single particulates down to approximately 20 µm through comparison of the unknown particle’s infrared spectrum to spectral library databases. For particles smaller than 20 µm, diffraction effects become problematic and a Raman microscope is more appropriate for spectroscopic analysis. In this study, infrared spectra were collected using a Nicolet 6700 Fourier transform infrared (FTIR) spectrometer (Thermo Scientific) equipped with Nicolet Continuμm infrared microscope set in reflectance mode when using gold-coated polycarbonate filters or transmission when using 13-mm sodium chloride windows. The Continuμm uses a 32x objective and condenser along with a mercury-cadmium-telluride (MCT)-A detector and a motorized x-y stage. The following scan settings were used:

A background spectrum was collected immediately after the sample was analyzed. The sample single-beam spectrum was then normalized to the appropriate background scan to yield absorbance spectra. Spectra were collected and searched using OMNIC 7.4.127 (Thermo Fisher Scientific, Inc.) software.
Elemental analysis by SEM-EDS. Particles were mounted onto an aluminum SEM stub using a carbon adhesive tab. Prior to analysis, the sample was sputter coated with ~2 nm of Au/Pd for charge control. SEM micrographs and energy dispersive spectra were collected under standard (high) vacuum conditions using the FEI Quanta 400 scanning electron microscope and Oxford INCA X-sight energy dispersive spectrometer (EDS). The sample analysis configuration was set to 20KV accelerating voltage for imaging and EDS with a 10-mm working distance. A focused electron beam was rastered across the surface of the sample. The electron beam generates X-rays in the beam-specimen interaction volume beneath the sample surface; depth is approximately 1 µm. Elemental analysis is performed by measuring the energy and intensity of the X-ray signals exiting the sample generated by the electron beam. The EDS detector converts the energy of each characteristic X-ray into a voltage signal of proportional size.

A visible precipitate formed in laboratory prepared samples of 0.04 mg/mL travoprost solutions at pH 6.5 after storage in glass vials at 60 °C for six weeks. The formation of particulate matter under stressed conditions indicates a critical product quality issue that affects the potential development, safety, and longevity of the product formulation. Identification of the chemical composition of the particles was essential to understand the mechanism of formation and to mitigate the problem. Figure 1 illustrates the steps of a forensic microscopy investigation.

Particle characterization by polarized light and hot stage microscopies. Particles were isolated by two methods. Centrifugation of the sample was a simple way to concentrate particles and wash them of residual formulation components. In some cases, particles were also isolated by filtration through a gold-coated polycarbonate filter. The gold-coated filter membrane made possible direct infrared analysis of particles via specular reflectance.

A sample of the precipitate was dispersed in 1.66 RI oil onto a clean microscope slide. Microscopic examination (Nikon LV100 POL 100-400X) revealed fine needle crystals having weak birefringence. Most of the needle-shaped particles were 5-20 μm long and approximately 1 μm in diameter (Figure 2); however, occasionally needles as long as approximately 200 µm were observed. Thermal analysis by hot stage microscopy revealed the needles melted between 155-160 °C suggesting a crystalline state. Based on the needle morphology and an assumed density of 1.5 g/cm3, it was estimated that ~ 0.6 ng of material per particle was present (Figure 3).

Infrared microspectroscopy. Individual needle particles isolated onto a gold-coated polycarbonate filter were analyzed by infrared microspectroscopy using specular reflectance off of the gold coating. A representative spectrum is shown in Figure 4. The particle spectrum was searched against infrared spectral libraries and revealed good correlation to a salt of a long alkyl chain fatty acid as shown in Figure 5.

Elemental analysis by SEM-EDS. A precipitated fatty acid salt was the suspected cause of particulate formation; thus, elemental composition was investigated using SEM-EDS to identify a potential counter ion. Care was taken to copiously rinse particle isolates of formulation components prior to analysis. A representative SEM-EDS spectrum of the needle particles is shown in Figure 6. A strong and consistent response for zinc (Zn) was observed in the needle particle spectrum in addition to carbon and oxygen. The travoprost formulation is preserved with 0.025 mg/mL zinc chloride (ZnCl2), which is the likely source of Zn2+ for the fatty acid salt.

Particle formation from solutions of ZnCl2 and 12-hydroxystearic acid to confirm identity of needle particles. The particle characterization data indicated that the precipitate isolated from stability samples was consistent with a zinc salt of a long-chain fatty acid. A logical source of fatty acid is the polyethylene glycol (PEG)-40 hydrogenated castor oil used as a drug solubilizer in the formulation. Ricinoleic acid is the principal fatty acid component in castor oil; its structure is shown in Figure 7.

Based on this hypothesis, a simulation experiment was conducted using 12-hydroxystearic acid (12-HSA) purchased from a commercial source (TCI America, Part# H0308). Addition of a few mLs of 12-HSA solution in isopropyl alcohol to a 5 mg/mL aqueous solution of ZnCl2 resulted in rapid formation of visible particulates. The ZnCl2/12-HSA particles were isolated from the solution and dried. The infrared spectra of these particles were compared to the precipitate isolated from the travoprost formulation (Figure 8). The infrared spectra of the simulated precipitate are nearly identical to the unknown and provide strong evidence that the particles that formed in the travoprost formulation are hydroxystearic acid zinc salt.

The authors are grateful to Steve MacLeod and Brian Rohrs for critically reading this manuscript and for many helpful discussions.

When referring to this article, please cite it as M.L. Ciolkowski, S.J. Ingham, and B. J. Glass “A Forensic Microscopy Approach for Identifying Subvisible Particulates in a Sterile Ophthalmic Solution,” Pharmaceutical Technology 41 (6) 2017. 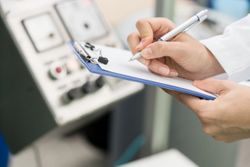 Reducing Uncertainty of an Analytical Method through Efficient Use of Replication

Limitations and Advances in Dissolution Testing