Designing loss-in-weight feeders for accurate and consistent refill is crucial to a continuous solid-dosage process.

A typical LIW feeder achieves rate control by weighing the entire feeder, hopper, and the material contained in it (see

Figure 1). The speed of the metering device is controlled to result in a per-unit-time loss of system weight equal to the feed rate. As an integral part of loss-in-weight feeding, the weighed hopper must be resupplied with material. Several pharmaceutical operations are dependent upon this refill of feed principle. These operations include continuous extrusion (both hot-melt and wet-granulation extrusion), continuous direct compression, and continuous wet granulation.

In the past, the traditional method of maintaining feed was to simply use a constant metering speed throughout the refill phase-a speed corresponding to the metering speed associated with gravimetric control just prior to entering the refill phase. If, for example, the metering speed averaged 60 RPM just prior to the system sensing the need to refill the supply hopper, the screw speed would be maintained at that 60 RPM for the duration of the refill operation. After refill is completed, material has settled, and the feeder senses an appropriately declining system weight, the feeder is returned to gravimetric operation where metering speed once again becomes the parameter of control.

There are two problems associated with this technique. First, during refill, the feeder only acts as a volumetric feeder. Second, upon re-entry to true LIW control, abrupt changes in feeder speed can occur, resulting in a sometimes extended period of off-spec mass flow until the feeder settles into the new proper speed.

âFigure 2 plots the hopper weight versus time and shows the declining weight signal, the slope of which is the feed rate (change in system weight per unit time). Note that the hopper does not empty completely before the refill phase is triggered, primarily to assure an ever-present supply of material at the metering device so feeding may proceed without interruption. Additionally, if a sufficiently large material heel is not present, the increasing pressure applied by the impact of the incoming and possibly aerated material during refill may cause uncontrolled flooding through the feeder.

Even with an insulating heel of material in place, density within the metering zone will rise somewhat as the hopper fills. Given a constant metering speed during refill, this increase in density causes aggressive degradation (overfeeding) in feeding accuracy as more and more material enters the hopper and compacts the material into the hopper’s lower regions.

How severe is this accuracy? The answer hinges on hopper size/geometry in addition to the compactability of the material itself. Laboratory tests and field experience involving many hundreds of materials show that, in practical terms, headload-related LIW overfeeding may range between +/- 1% for relatively constant-density materials. For powders and other materials whose density can vary substantially, however, this variation can be as high as +/- 10–15%. When dealing with compressible pharmaceutical powders in continuous operations, this variation can significantly affect accuracy.

Using a smart refill algorithm. A controlled method of storing and trending the weight-to-speed relationship was developed to avoid these problems. This method, referred to as Smart Refill Technology (SRT), discards the approach of maintaining a constant metering speed. Instead, during automatic refill, the feeder control system switches to volumetric control, relying on the trending data obtained while the hopper was emptying of product. As the hopper is emptied, the corresponding speed of the motor is trended.  When the refill is occurring, this same speed is used for the corresponding hopper weight (see Sidebar).

SRT enables metering speed to be gradually lowered during refill to precisely counterbalance the effects of increasing material density occurring within the metering zone as the hopper weight increases. In this way, gravimetric feeding accuracy during the brief refill may be maintained.

Sidebar Figure 1 illustrates the Smart Refill Technology (SRT) approach. The graph at the top plots net hopper weight versus time.  Beginning with a full hopper (where net hopper weight equals refill complete weight) gravimetric operation is in effect, and the feeder operates normally. As net hopper weight declines, the controller also determines and stores a set of up to 100 feed factors, each of which is the index of the average density of material discharged at the hopper weight associated with the feed factor. A low feed factor indicates that a higher number of screw revolutions were required to discharge a given weight, implying a reduced material density. Conversely, a higher feed factor reflects higher density because fewer revolutions were required to deliver the same material weight.

The middle plot of Sidebar Figure 1 shows motor speed versus time. During the early portion of the gravimetric feeding phase, motor speed is relatively constant because density within the metering zone of the feeder, while higher than at later times in the feeding cycle, does not vary substantially. This is because material in the upper portion of a typical hopper is largely supported by the material below, and, in turn, the tapering walls of the lower portion of the hopper. As feeding proceeds and hopper level declines, headload in the metering zone begins to lessen, resulting in a reduction in density and a corresponding increase in motor speed required to maintain feed rate. When hopper weight reaches the refill request threshold, the refill phase begins. During refill, SRT begins with the motor speed that was in effect at the time of the refill request, and then modifies that speed by applying the corresponding feed factor as each hopper weight “slice” is encountered.

By taking this more sophisticated approach, it is possible to smoothly exit the refill phase and return to true gravimetric operation. Additionally, by controlling feeder speed during refill based upon the most recent performance history, reverting to volumetric performance is avoided and gravimetric accuracy is essentially preserved.

As a rule, the refill period should be approximately 6–10 seconds. This duration ensures positive control over the incoming material but is so short that minor flow variations should not perturb the downstream processes. For many pharmaceutical operations, however, the refill window can be much smaller, due to the shorter overall time span of the operation. Because it is important to keep the feeder in gravimetric control over the majority of the continuous operation, often more frequent and shorter refills are used, typically using approximately 60–80% of the refill hopper volume. This refill window can be crucial to the overall operation of the feeder and must be evaluated for the material being fed and its properties.

For this reason, it is imperative to study the bulk solid properties such as bulk density, particle size, compressibility, angle of repose, gas permeability, particle morphology, and angle of friction when dealing with any type of material feeding operations, including refill. Each of these material characteristics will greatly affect not only the flow out of the hopper to the feeder but also how quickly the hopper is refilled. For example, if the bulk material has a high gas permeability (i.e., if gas can escape rapidly from the solid), the refill can occur as rapidly as is feasible. On the other hand, if the bulk material has a low permeability rate (i.e., the gas expands the bulk material and doesn’t quickly escape to return the solid to its resting condition), care must be taken during refill, for often these materials become floodable in this condition or at least suffer significant bulk density changes.

For example, if flooding of the bulk solid begins during refill, the product could easily flush out of the LIW feeder. At a minimum, air entrainment effects resulting in underfeed conditions during and immediately after refill can significantly alter bulk density, because the control system is using control data from earlier in the run, when the product density was much higher. Air entrainment comes from rapidly refilling the feed hopper, such that air, being unable to quickly escape, passes through the incoming material to the region of lower pressure in the refill hopper. Venting of the weighed hopper can minimize the problem, but now dust collection and, in the case of active materials, filtration, must be arranged. Adequate venting will assist in material settling and aid in a quicker return to true gravimetric operation.

There are several choices of refill devices used above the feeder hopper. Options include modulating butterfly valves or, in the case where extreme control is required, the use of alternate metered devices, such as volumetric screw feeders. In addition, the use of pneumatic loaders above the butterfly valve is often employed to transfer the material to a receiver above the feeder hopper.

It should be noted that problems may arise when the refill system does not take into consideration the capacity of the feeder hopper, the flow properties of the bulk sold, and the distance and potential storage volume of the bulk solids that can occur between them. For example, in refilling a feeder hopper from an intermediate bulk container (IBC), the volume of the product in these vessels will often exceed the volume of the feeder hopper. Clearly, it is impossible to control the refill without overfilling the feeder hopper, unless a time window is established for the opening and closing cycle of the refill valve. This time window can be calculated based upon bulk density of the material, the angle of repose (which dictates the settling level in the feeder hopper), and the flow rate through the refill device. When discharging from bins or IBCs, which may be equipped with flow aid devices (e.g., vibrators or live bottom bins), special care must be made to isolate the vibration of these devices from the feeder hopper to ensure that there is no interference on the LIW feeder weight-measuring device.

Pneumatic vacuum receivers as refill devices. Pneumatic receivers, which operate under a dilute-phase vacuum transfer principle, are often used as refill devices, particularly for continuous operations. The pneumatic receiver can have a butterfly valve at its outlet, or it can be part of the volumetric feeder, which includes a valve at the outlet. The pneumatic system uses negative pressure to draw the material into a separately mounted and supported vacuum receiver. The receiver is filled to a determined level and then holds this material charge until the feeder below requests a refill. The level of fill in the receiver is determined by level sensors. At the point of the refill request by the feeder, the discharge valve opens and the receiver contents are discharged into the feeder hopper. At the same time of this release, a gas pulse is sent through the filter housed in the vacuum receiver to release any entrained particulate or material that may have settled on the filter. Filter material options include a laminated membrane-type material for quick release and easy-clean properties.

After dumping the material into the feeder hopper below, the valve is shut again and the receiver vacuum cycle immediately begins, so that the pneumatic receiver will be instantly ready for the next refill request. The use of pneumatic receivers as refill devices allows for an uninterrupted source of refill from a bulk container.

A pneumatic receiver avoids possibly overfilling the feeder hopper. It should be noted, however, that in some cases, refill by gravity (not pneumatic transfer) is preferred. Gravity refill typically uses an IBC above the feeder hopper, and this system should use a modulating control valve tied directly to the required feeder refill levels to avoid overfill, as previously discussed.

The refill method of the LIW feeder and the control of the refill algorithm are important processes in the optimal performance and design of a highly accurate continuous manufacturing system. Through careful evaluation of the feeding process, system layout, and material characteristics, a continuous feed and refill system can be optimized.

When referring to this article, please cite it as S. Nowak, "Improving Feeder Performance in Continuous Pharmaceutical Operations," Pharmaceutical Technology 40 (10) 2016. 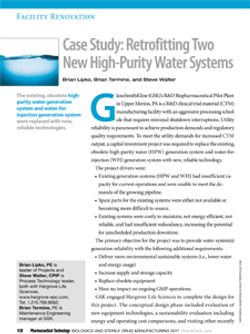