The coming years will show a slowing growth rate in the global spending of medicines, particularly when it comes to branded products.

Brands down; generics up

The coming years will show a slowing growth rate in the global spending of medicines, particularly when it comes to branded products. Overall, however, total global medicines spend is expected to top $1 trillion by 2015, according to analysis from the IMS Institute for Healthcare Informatics. The compound annual growth of medicines spend is predicted to be between 3–6%, compared with the average 6.2% annual growth that has been witnessed during the past five years.

The findings stem from the IMS Institute's new study, The Global Use of Medicines: Outlook Through 2015.

The fall of the brands

In particular, IMS paints a gloomy picture for branded medicines in the near future. IMS forecasts the spending for branded products to be nearly the same in 2015 as in 2010. However, the market share for such medicines, which fell from 70% in 2005 to 64% in 2010, is expected to decline further to 53% by 2015. The reason? Although there will be increased growth in brand spending (approximately 7–8%, 3–4% of which will come from price growth), this will be more than offset by other dynamics, including patent expiries and changes in national healthcare policies, which will have long-term effects on the spending and usage of medicines across many countries. Due to the market entry of generic products, the loss of earnings for branded sales between 2011 and 2015 is expected to reach $120 billion.

"Patents are expected to expire in one or more of the developed markets for 11 of the top 20, or 6 of the top 10 current, leading medicines, including Lipitor, Plavix, Advair Diskus, Nexium and Seroquel," explained the report.

Meanwhile in the emerging markets the growth for branded products is expected to be robust. These markets are expected to nearly double their spending on medicines to reach $285–315 billion, compared with $151 billion in 2010. Approximately 20% of this total increase in spending will come from branded products, but the majority of medicines spend will still be for generic products. IMS estimates that 80 cents of every dollar spent on medicines in the emerging markets in 2015 will be for generic drugs.

The rise of generics

Expenditure on generic medicines is expected to reach $400–430 billion by 2015, compared with $234 billion in 2010 and $124 billion in 2005. A large portion of this growth will be attributable to increased generic competition, as well as incentives from many markets for greater generic usage. In Spain and Italy, for example, generic and off-patent products have been subjected to substantial price reductions to encourage usage. For payers in the developed markets as a whole, the increased use of generic products will translate into net savings of approximately $98 billion in the lead up to 2015.

The US is expected to see the largest expansion in spending on generic medicines, which will largely come from new generics as US pharmacists already dispense generic products in most instances. In Europe, France, Germany and the UK will also experience significant increases in generics market spend. Both France and Germany are expected to see their share of the generic market expand to reach 21–22%, while the UK will could see its market share reach up to 28%. Out of all the developed markets, South Korea is expected to continue to spend the most on generic drugs. In 2010, the country had a 31.7% share of the generics market. This total is expected to reach 34–35% by 2015.

Interestingly, although the use of generic drugs is on the rise, the same cannot be said for their biologic counterparts: biosimilars. Even though such products are evolving rapidly, IMS Health expects that only about 1% of total global expenditure on biologics in 2015 will be attributable to biosimilars.

Speaking about the global spending dynamics as a whole, Murray AItken, executive director at the IMS Institute for Healthcare Informatics, explained in a statement, "Past patterns of spending offer few clues about the level of expected growth through 2015. There are unprecedented dynamics at play, which are driving rapid shifts in the mix of spending by patients and payers between branded products and generics, and across both developed and pharmerging markets."

The EMA has recently been accused of putting companies' commercial interests ahead of public safety. In response, the EMA has emphasised its recent initiatives to improve data access and transparancy.

The FDA has added a searchable database of inspection data to its website listing the names and addresses of facilities that the agency inspected in 2009 and 2010. Users can find inspection dates, the type of products produced and the agency's final classification.

AstraZeneca has settled a sexdiscrimination lawsuit by paying $250000 to 124 female sale specialists who worked at the company's Philadelphia Business Center (PA, US). The lawsuit alleged that the company had discriminated against the women by paying them on average $1700 less than their male counterparts.

The pharma industry has been called to action by a new report that highlights problems of patient noncompliance. The report estimates that non-adherence to prescribed medicine courses is responsible for an incremental 194500 deaths per year in the EU, resulting in costs close to 125 billion Euros. 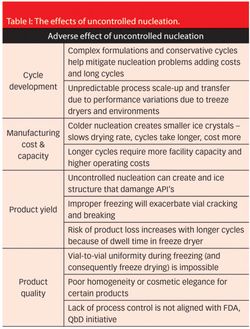