I can't remember a day go by in the last few years when I haven't received an email or item of mail inviting me to attend a conference or trade event. Indeed, if I accepted every invitation, I imagine that I would spend 85% of my working year travelling. Don't get me wrong, I really do see the value in events and I like attending them; I enjoy meeting new people, saying hello to familiar faces and, more importantly, learning about new advances. But times are tough financially and headlines announcing job cuts and restructuring within the pharma industry have been relentless in the last couple of years. So with so many cost-cutting measures being made, can companies still afford to make the huge capital investment required to make an impact at trade shows? I think not.

When I'm out and about, I do make a point of asking company representatives whether they have been pleased with the outcome of a trade show. In the past, people tended to be fairly positive; claiming that footfall was good and valuable contacts or sales were made. But there's been a shift in mood I feel. Perhaps this is because attendance figures are down, even though trade show organisers claim an "improved delegate turnout". Perhaps it's because the delegate profile, whether geographic or by job function, has changed and the average trade show delegate today doesn't hold the purse strings. Perhaps it's because companies are looking for better value for money or an improved service from the organisers, in comparison to what they were expecting during the good times of yesteryear. Or perhaps the Internet and the advent of the virtual conference, webcasting and podcasting, are beginning to make some shows redundant. Whatever the reason, I do believe that there has been a shift in opinion towards trade shows in recent years. Whilst I do not envisage much changing in the next few years at least — the large companies will still erect their impressive exhibition stands and people will still prefer making face-to-face contact rather than discussing business in a virtual world — I do think exhibitors will be thinking more wisely about how much money they choose to invest in these events. Already I've been hearing confirmatory murmurs such as: "next year, we will have a smaller stand"; "we plan to send less people next year", etc. In support of this view, a poll conducted by Pharmaceutical Technology (www.pharmtech.com/polls) at the end of 2010 found that an astonishing 60% of industry professionals attended fewer trade shows in 2010 in comparison with the previous two years whilst only 19% claimed that they attended more. I wonder what 2011 will bring... 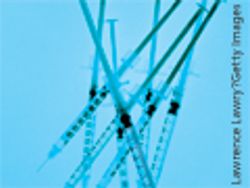