It has been estimated that during the next seven years, 30 biopharmaceuticals will be approved. This estimation was announced at the second Annual bioProcess UK Forum by the UK's Northwest Regional Development Agency. The estimated number of biopharmaceutical approvals was based on the amount of candidates that are currently in clinical trial Phases I–III and preregistration Phase.

It has been estimated that during the next seven years, 30 biopharmaceuticals will be approved. This estimation was announced at the second Annual bioProcess UK Forum by the UK's Northwest Regional Development Agency. The estimated number of biopharmaceutical approvals was based on the amount of candidates that are currently in clinical trial Phases I–III and preregistration Phase.

Biopharmaceuticals are unlike chemically synthesized pharmaceutical drugs and have the potential to transform the treatment for a serious disease that currently has no safe or effective treatment. In this way they are considered to be a major advance for modern medicine.

The research revealed that more than 50 UK companies are involved in biopharmaceutical development, the pipeline of which consists of 127 products in preclinical trials; 70 products in clinical trials; and four products in preregistration. It was also revealed that the UK is the second largest developer of biopharmaceuticals after the US. Additionally, the report analysed the types of biopharmaceuticals in development and the results showed that proteins and protein antibodies constitute two thirds of the UK's pipeline. Chair of the Bioscience Leadership Council Bioprocessing Working Group, Dr Stephen Taylor, stated: "Successful protein-based therapies are already offering new treatment options to patients with cancer and Crohn's disease."

The amount of bioprocessing contract manufacture and supply companies based in the UK is increasing as a result of this promising pipeline. These companies are involved in the scale-up and manufacture of biopharmaceuticals.

A collaboration and cross-licence agreement have been signed for the use of antibody-related technologies. Affitech, a human antibody therapeutics company based in Oslo (Norway), has signed an agreement with the US-based development and manufacturing company, XOMA, for research and discovery purposes.

Under the terms of the agreement, the Norwegian company will receive a licence for the discovery and screening bacterial cell expression technology from the US firm, which it will use to develop antibody products in conjunction with its own phagemid display-based Breitling antibodies libraries, cell-based antibody screening (CBAS) technology and the AffiScreen high-throughput screening system. Additionally, it has the opportunity to produce antibodies under the intellectual property of the US company.

The naïve antibody library from the Scandinavian firm will be available for use in target R&D functions and the development and commercialization of selected antibodies. The enterprise will also provide patient-derived libraries and should discover new antibodies against the US company's targets using its screening system and CBAS technology.

The agreement will release the Norwegian business along with any designated collaborators from previous applications of XOMA's antibody expression technology and will give the company allowance to utilize the technology in combination with its own in the future. The financial terms of the agreement were not disclosed.

A commercial agreement has been signed by the operator of the National Biomanufacturing Centre (NBC) with SR Pharma. The signed contract will involve supplying a package of strategic product development consultancy and biomanufacturing services.

Eden Biodesign will use its knowledge of commercializing novel biopharma research to develop a product technology platform from SR Pharma. This is the first contract to be publicly announced by the agency and will involve a 12-month project to start when the NBC comes on-line. NBC is a £34.25 million initiative due to open early this year.

Manufacturing authorization has been granted to Avecia's advanced biologics centre. The Billingham (UK) facility received the approval from the Medicines and Healthcare products Regulatory Agency (MHRA).

The biologics manufacturing facility was a $100 million investment by the company and it has the capacity to run four large-scale manufacturing procedures at the same time. It has been in commercial operation since early 2004 and is a large-scale facility with twin 5000 L microbial fermentation production streams.

This is the first inspection by the MHRA of the advanced biologics centre, which also covered the company's 1000 development-scale plant that has been considerably expanded since its launch in 1998.

The authorization it has received confirms the cGMP operations and the company's facilities are in general compliance with GMP principles and guidelines set out by the Commission Directive 2003/94/EC.

Rise of the robots

Adsorption of small drug particles at the surface of large excipients 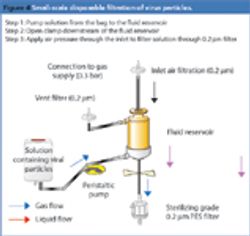