Tufts research suggests costs to launch a new drug have doubled since 2003, but some question conclusions.

The Tufts University Center for the Study of Drug Development (CSDD) released its latest research on the costs and timeframes required for launching a new drug.  Although the study acknowledges that it still takes about 10 years to launch a new brand-name pharmaceutical, this year, the costs required were estimated at $2.6 billion (in 2013 dollars), $1.4 billion of that for out-of-pocket costs and another $1.2 billion in time costs (i.e., the cost of missed opportunities, when resources are channeled from other potential activities to the development of a specific drug). In 2003, CSDD put the figure at $802 million (in 2000 dollars, which would be $1044 in 2013 dollars), so the latest figures reflect an increase of 145%, or a compound annual growth rate of 8.5%.

Factors leading to higher costs, researchers say, include more extensive and complex clinical trials and high failure rates for other drugs in testing. Only 12% of new candidate drugs entering clinical trials wind up being approved for use, according to CSDD. After a drug has been approved, there is the need to test new indications, new formulations, new dosage strengths and regimens, and to monitor safety and long-term side effects in patients, as required by FDA. CSDD estimates that these post-approval costs run to $312 million, increasing the full product lifecycle cost per approved drug to $2870 million (in 2013 dollars).

Tufts based its new data on information provided by 10 pharmaceutical companies on 106 randomly selected drugs first tested in human subjects between 1995 and 2007, including 87 small molecule drugs and 19 biopharmaceuticals.  “Drug development remains a costly undertaking despite ongoing efforts across the full spectrum of pharmaceutical and biotech companies to rein in growing R&D costs,” said Joseph A. DiMasi, director of economic analysis at Tufts CSDD and principal investigator for the study, in a press release. The study was authored by DiMasi, Henry G. Grabowski of the Duke University Department of Economics, and Ronald W. Hansen at the Simon Business School at the University of Rochester.

“Because the R&D process is marked by substantial technical risks," DiMasi added, “with expenditures incurred for many development projects that fail to result in a marketed product, our estimate links the costs of unsuccessful projects to those that are successful in obtaining marketing approval from regulatory authorities.”

Rising drug development costs have been driven mainly by increases in out-of-pocket costs for individual drugs and higher failure rates for drugs tested in human subjects, according to the study. Factors that likely have boosted out-of-pocket clinical costs include increased clinical trial complexity, larger clinical trial sizes, higher cost of inputs from the medical sector used for development, greater focus on targeting chronic and degenerative diseases, changes in protocol design to include efforts to gather health technology assessment information, and testing on comparator drugs to accommodate payer demands for comparative effectiveness data. Lengthening development and approval times were not responsible for driving up development costs, DiMasi said.

“These findings underscore the ongoing challenges the biopharmaceutical industry faces as R&D efforts focus on some of the most costly and challenging diseases, where the science is more complex and the failure risks are compounded," said a PhRMA spokesperson in a press release.

However, some industry observers question CSDD’s figures.  Indiana University Medical school professor and New York Times blogger Aaron Carroll has questioned the study’s objectivity and its failure to account for public funding in industry R&D in a recent post.

In a press release, Doctors Without Borders’ director of policy and analysis Rohit Malpandi puts it bluntly. “If you believe [the study numbers], you probably also believe the earth is flat.”

Malpani cites Andrew Witty’s reaction to CSDD’s previous estimates, when he called the 2003 figure “one of the great myths of the industry”

As drug pricing and increased access to medicine remains a sensitive issue, for both payers and the public, the debate promises to continue. If nothing else, CSDD’s figures suggest a need for pharma companies to “fail fast,” or to take an approach to early development that considers all possible risks and points of failure very closely for its new candidate drugs.

European CDMOs Venture Into US Market 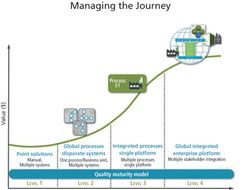 Moving from Corrective to Preventive Actions