Regulatory agencies have significant interest in the implementation of more advanced methods for the detection of adventitious agents. This interest, according to Horst Ruppach, director of viral clearance and virology at Charles River Laboratories, comes from recent experiences in which adventitious viruses were found in a marketed rotavirus vaccine in 2010 and in an insect production cell line (SF9) in 2014. In both cases, the standard testing methods failed to detect these contaminants. Concerns about more advanced methods still remain to be addressed.

Overall, the methods used in adventitious agent testing have not changed dramatically in recent years and are performed as recommended and described in guidances and regulations. Antibody detection assays and nucleic acid amplification techniques are used to screen source materials for specific viral contaminants in the plasma product industry, according to Ruppach. A panel of cell-based in-vitro assays, in-vivo assays combined with antibody detection, and quantitative polymerase chain reaction (qPCR) assays for specific viruses is used in the vaccine and recombinant protein industry.

Protocols have been, in some cases, partly modified or complemented when necessary, such as prolonging incubation times for some in-vitro assays to detect slow-growing viruses like Vesivirus, according to Ruppach. In the plasma-product industry, he notes that screening for emerging viruses such as Zika and Hepatitis E has also partly been added to meet country-specific recommendations. A shift from culturing and in-vitro assays to qPCR-based assays for mycoplasma testing of recombinant products has also occurred to some extent.

In general, however, release testing is still performed using slow, but long-accepted culture-based tests, according to Michael Brewer, head of pharma analytics with Thermo Fisher Scientific. The exception, he adds, is the much broader use of qPCR for in-process testing during cell-culture processes (e.g., mycoplasma, mouse minute virus [MMV], and Vesivirus for Chinese hamster ovary [CHO] culture) and even for conditional release to downstream processing while waiting for results of the culture-based tests.

There are real issues with existing cell-based methods that are driving interest in the development of alternative techniques. “Cell based in-vitro assays can detect a broad range of viruses, and even unknown viruses, but the methods are not standardized and can be run in different ways, which significantly impacts the assay specificity and sensitivity,” Ruppach says. In addition, some potential contaminating viruses don’t grow in the detector cells, while others do grow but cannot be detected. “On top of these issues is the fact that positive results cannot be assigned to a virus type or even virus family; subsequent identification assays are necessary,” he observes.

In-vivo assays encounter the same challenges and limitations, and there is a high failure rate due to the route for test sample administration. Studies have also shown a low detection rate for these tests compared to in-vitro assays, according to Ruppach. Ethical reasons are an additional concern, with growing emphasis placed on minimizing animal testing. One of the biggest issues with both in-vivo and in-vitro testing, however, is the time it takes to obtain results, which can be as long as five to six or even more weeks. “An additional complicating factor is the fact these assays cannot be validated following International Council for Harmonization (ICH) Q2 due to the undefined specificity and sensitivity,” he states.

While these limitations are overcome with qPCR, Brewer points out that, at the moment, available assays exist only for a small set of viruses that represent the biggest threat to CHO cell culture. “Rapid testing for viruses and mycoplasma remains a critical need for the industry to achieve the goal of rapid, real-time or near-real-time lot release. For continuous processing, time to result is even more important,” he asserts.

There have been some advances in instrumentation for adventitious agent testing that have the potential to impact testing in the near future. Ultra-high multiplex PCR is enabling rapid workflows when combined with high-recovery nucleic acid extraction, automated sample prep, and high-throughput DNA sequencing technologies, according to Brewer.

There is much discussion in the industry and among regulators about the potential advantages of new nucleic acid-based technologies and other high-throughput sequencing (HTS) methods, also known as massive parallel sequencing or next-generation sequencing (NGS). “These technologies have the power to detect any virus with a level of sensitivity comparable to virus-specific qPCR and, unlike in-vitro and in-vivo assays, deliver sequence data that can identify the contaminant,” says Ruppach.

There are other benefits as well. “Replacing traditional adventitious agent tests with NGS-based tests would provide the highest level of confidence in negative and positive results,” states Brewer. “In addition, time to result for such tests is aimed to be less than two days, and the ability to automate much of the workflow could reduce hands-on time to less than three-and-a-half hours. Furthermore, while traditional culture testing is limited to sampling points in cell banks and harvest media only, rapid molecular testing enables sampling, testing, and decision-making throughout cell-culture processes,” he continues.

For instance, Brewer notes that qPCR and NGS techniques that offer quantitative values or target enumeration capability can be applied to assess viability by measuring changes in target nucleic acid levels at multiple time points in the case of a positive initial test.

Managing the large amounts of data produced when using HTS technologies presents another challenge. “Data processing becomes an important factor in results evaluation. The algorithm used can lead to both false-negative or false-positive results and significantly impact the outcome of the analysis,” Ruppach explains. No regulations or standards have yet been established regarding the data-processing process.

Brewer notes that qPCR has been improved by the inclusion of controls that help reduce the risk of false positives due to inadvertent cross contamination of test samples with positive controls.  He does agree that a full solution will require designed-for-purpose software to enable data analysis and results reporting, including enabling compliance with 21 Code of Federal Regulations Part 11.

The concept of nucleic-acid testing has been well received by industry and regulators, and solutions are in development. “The goal is to supplement or replace the traditional adventitious agent tests with rapid NGS-based detection and identification of a predefined panel of viruses and broad range of bacteria, including mycoplasma,” says Brewer.

Initiatives are underway to grow regulatory understanding of the capabilities of these new technologies that are supported by various regulatory agencies. For instance, Ruppach points to the Advanced Virus Detection Technologies Interest Group, which was established by the industry and FDA to address specific challenges and provide solutions to make these technologies ready for use under GMP conditions.

The Consortium on Adventitious Agent Contamination in Biomanufacturing (CAACB), established by the Massachusetts Institute of Technology Center for Biomedical Innovation, has also had a positive impact. “The CAACB allows for open communication on contamination events that have impacted the industry and provides a forum for experts to discuss how viral testing can be improved and the overall risk of viral contamination reduced,” according to Brewer. The consortium has also helped to develop a more comprehensive understanding of the adventitious agents that are encountered.

“More advanced NGS-based techniques are in development and offer the potential to supplement or replace the 28- or 14-day culture-based test following validation and regulatory review and acceptance,” asserts Brewer. “Given that a stated goal of the pharmaceutical industry is to move to real-time or near-real-time lot release in the future, replacement of the 28- or 14-day culture-based adventitious agent test with a rapid test will be required,” he adds. 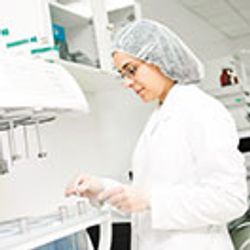