Published on: October 7, 2015
Cynthia A. Challener

The use of low-temperature chemistry can often lead to more direct, cost-effective routes to sophisticated pharmaceutical compounds.

The complexity of modern small-molecule drug candidates has increased rapidly in recent years as discovery and development teams seek novel compounds with unique therapeutic properties and attractive physicochemical characteristics. More complexity typically equates to more challenging syntheses and the need for organic transformations that proceed with exquisite selectivity--stereoselectivity, regioselectivity, and chemoselectivity. Often the desired pathway is only slightly different energetically than those that provide undesired products. Running reactions at very low temperature can provide greater control, and thus higher yields and purities of desired isomers. Low temperature is also used to control the reactivity of exothermic processes.

Low-temperature reactions require special equipment, however, and can, in some cases, be more costly than reactions performed at room temperature. In other cases, dramatically improved yields and purities overcome the higher costs of cooling equipment and greater energy consumption required for low-temperature reactions. Even so, there is a desire to find alternative methods for achieving selectivity without the need to perform reactions at very low temperatures. Flow chemistry is one approach that is receiving increasing attention as a means for addressing both the need for higher selectivities and safer reaction conditions at higher temperatures.

Increasing complexity and need for selectivity
Control of reactivity in the synthesis of pharmaceutical intermediates and active ingredients is crucial for obtaining the desired products in high yields and also cost-effectively. In addition to proper route design and engineering--and careful selection of raw materials, catalysts, and solvents--the appropriate use of pressure and temperature can be significant.

Temperature is particularly important in reactions where the formation of very similar products that are only slightly different energetically is possible. Running such reactions at very low temperature can favor the desired product over unwanted isomers, whether they are stereoisomers (enantiomers or diastereomers or regioisomers [cis and trans]). Even desired chemoselectivity--the preferential reaction of one functional group over another--can be achieved at lower temperatures. In other cases, highly reactive intermediates that are unstable and decompose at room temperature may be sufficiently stable at low temperature. Processes with gaseous reactants typically can be performed more readily at colder temperatures below their boiling points.

When combined with advanced synthetic chemistry, particularly organometallic synthesis, the use of low-temperature chemistry can often lead to more direct, cost-effective routes to sophisticated pharmaceutical compounds. Today, most pharmaceutical companies and contract manufacturers can perform low-temperature chemistry at reasonably large scale because it is now considered a fundamental capability.

“Low-temperature reactions are widely used in pharmaceutical synthesis, with examples including metal-organic reactions such as lithiations and Suzuki couplings and other metal-catalyzed (asymmetric) reactions. Chlorinations, alkylations at temperatures of -30 °C, as well as reductions, Friedel-Crafts acylations, and deprotonation/addition reactions are other examples. Even reactions at temperatures as low as -75 °C, which are generally achieved using liquid nitrogen cooling systems, are more common today,” says Rhony Aufdenblatten, head of the customer proposal group for chemical and microbial manufacturing in Lonza’s Pharma and Biotech Segment. Lonza currently offers low-temperature capability using different cryogenic technologies up to the 10,000-L scale.

Importance of initial assessment and cooling technology
One of the main challenges in performing low-temperature chemistry for pharma synthesis is the need to balance setup and operational costs for each individual process, which can only be determined by performing assessments on a case-by-case basis, according to Aufdenblatten. “While many producers do have some capability for low-temperature synthesis in one form or another, the appropriate type of cooling system for a given reaction depends on the nature of the process,” he explains.

For very-low-temperature reactions, there are two basic cooling systems in use today: direct cooling of the reactor with liquid nitrogen or indirect cooling using a heat transfer fluid. Most often, the choice of cooling method is determined by the access to liquid nitrogen in the plant and the plant layout. While the use of liquid nitrogen to cool a secondary coolant flowing through a jacket around the reactor appears to be more common, some manufacturers do use liquid nitrogen directly in tubes surrounding the reactor because the cooling is more rapid and efficient. It can be difficult to maintain constant temperatures, however, and experienced operators are needed to run such systems.

Equipment and other considerations
Regardless of the cooling method, it is important that the reactor be properly designed and constructed of appropriate materials with matched coefficients of thermal expansion. Otherwise, expansion and contraction of reactor components such as jackets, flanges, and valves may cause leaks or other damage.

For large-scale low-temperature reactions, careful consideration of the reactor geometry is also important. Often, solvent viscosities increase at very low temperatures, which can affect the heat-transfer and mass-transfer properties of the reaction solution. Such behavior must be taken into account when determining how different reagents will be added to the reaction mixture to ensure thorough mixing and heat dissipation and to prevent local ‘hot spots’ that can result in inconsistent and undesired reaction outcomes.

It is important to note, however, that with proper planning, reactor and cooling method design, and process engineering, low-temperature synthesis provides access to high-value pharmaceutical intermediates and ingredients that would otherwise be difficult to obtain in high yields and high purities.

The attraction of flow chemistry
On the other hand, there are some exothermic reactions that require extremely low temperatures (-100 °C) to control, which can be very challenging to achieve and may not be practical on a large scale. For other processes, particularly those run at temperatures ranging from -60 °C to -80 °C, the cost of performing low-temperature reactions on a large scale can significantly impact the economics of the product.

“The popularity of using flow chemistry as an alternative to low-temperature reactions has grown for these types of systems,” says Aufdenblatten. With flow chemistry, it is possible to perform hazardous reactions that cannot be safely implemented in large-scale batch reactors because reactants, intermediates, and products are only ever present at very low concentrations for very short residence times. As a result, control of process parameters, including temperature and pressure, is more precise.

In addition, flow reactions allow for lowered utility costs because the temperatures are typically higher compared to those required for similar batch reactions, according to Aufdenblatten. He also notes that it is becoming more common to consider running low-temperature processes under flow conditions to potentially achieve higher selectivities and yields. “Often times, individuals from process development groups will attempt to avoid processes that run at very low temps,” he adds.

Recently, researchers at the University of Cambridge and Dow Chemical Company developed a modular flow platform for cryogenic reactions in which batch-based low-temperature reactions are represented as a series of five flow coils with independent volumes (1). The utility of the platform was demonstrated by running several reaction types typically performed at low temperature, including Grignard reactions, heteroatom acetylation, and the functionalization of alkynes and heterocycles. A compound library of 20 polyfluorinated molecules was also prepared via a sequential metalation-quench procedure. A tube-in-tube reactor was also shown to be effective for adding gaseous reactants such as carbon dioxide. 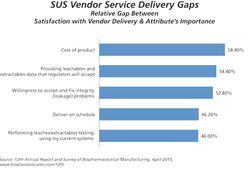